How do you choose the next book to read?
It's generally a three-fold choice for me. 1) If I have books that need to be reviewed by a certain date, I give them priority. 2) If I've just finished a huge tome, I sometimes like to mix things up by going for something shorter next. 3) What genre am I in the mood for? If I've read several non-fiction books in a row, it's nice to pick a fictional work for a change or vice versa. Likewise, if I've just read three fantasies, I'll take a break from that style and read a contemporary.

Opening sentence:
The funeral was a week ago and I still feel more relieved than anything else.


From page 56:
All the patterns are painted with such hair-fine lines I almost can't believe they were made by a human hand. 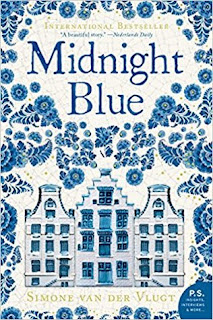 Amsterdam 1654: against the backdrop of Holland's Golden Age, a dangerous secret threatens to destroy a young widow's new life.

Following the sudden death of her husband, twenty-five-year-old Catrin leaves her small village and takes a job as a housekeeper to the successful Van Nulandt merchant family. Amsterdam is a city at the peak of its powers: science and art are flourishing in the Golden Age and Dutch ships bring back exotic riches from the Far East. Madam Van Nulandt passes her time taking expensive painting lessons from a local master, Rembrandt van Rigin, and when Catrin takes up a brush to finish some of her mistress's work, Rembrandt realizes the maid has genuine talent and encourages her to continue.

When a figure from her past threatens her new life, Catrin flees to the smaller city of Delft. There, her gift as a painter earns her a chance to earn a living painting pottery at a local workshop. Slowly, the workshop begins to develop a new type of pottery to rival fancy blue-on-white imported Chinese porcelain—and the graceful and coveted Delft Blue designs she creates help revolutionize the industry. But when tragedy strikes, Catrin must decide whether to defend her newfound independence or return to the village that she'd fled.