Combustion by Berengaria Brown
Authors always panic when they see a review about their book. That book is like their baby, and they are terrified someone won’t love their baby as much as they do. But getting a good review always makes an author smile.
I just received an AWESOME review for Combustion, so yeah, I’m smiling.
Miranda, from Joyfully reviewed, said, “Combustion is a scorching novella!  Glenn, Xonra and Morgan have sensational chemistry that keeps on flaming.  Combustion is a sexy erotic story with a serious twist.  The underlying story that takes place at Xonra’s work is compelling and adds to this spicy tale.  The characters are sinfully sexy and they make Combustion hot, hot, hot!” 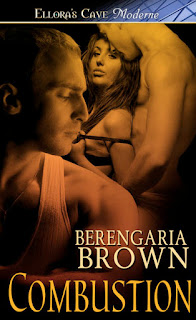 Combustion blurb
Xonra Gibson attends the memorial service for a friend, and is embarrassed to be attracted to the broad-shouldered hunk squeezed into the chair next to her at the overcrowded event. It turns out the delicious Glenn Hilton is partnered to the equally yummy Morgan McLean.
Xonra allows her hormones to lead her to the men’s apartment for an incredibly hot one-night stand and three fiery orgasms, a personal record for her. The men are determined to spend more time with Xonra and get tickets for a weekend at Berisford Village a historical tourist attraction whose owner happens to be a difficult client at Xonra’s PR firm. The village is fascinating, the accommodation luxurious and the orgasms stupendous, but Xonra is convinced something under the surface at the village is wrong.

Xonra kept her gaze either on the minister conducting the service, or on the floor, but she couldn’t help being highly aware of the hunky man pressed hard against her left side. His shoulders were so broad he was overhanging her seat no matter how much she leaned into the wall. And his right thigh seemed glued to her left one, sending waves of lusty heat right through her body. Damn, he’s good looking, well what she could see of him through her peripheral vision. Late thirties, maybe forty, faint touches of gray in his black hair, chocolate eyes, tanned skin, six feet tall at least. And those broad shoulders and muscular thighs. Well yum!
Likely married with six kids! she reminded herself firmly. And you’re supposed to be focusing on MaryAnne, not the hunky guy sitting next to you!
As Vice President of Advertising for HR Resources Ltd., Xonra saw a lot of good-looking men, and none of them had ever lit her fire the way Mr. Shoulders next to her did. She pictured herself sliding that crisp white shirt off his arms, leaning into his chest and licking across— Oh, shit I’ll have wet underwear in a moment! MaryAnne. Focus on MaryAnne. It’s totally inappropriate to think about some unknown hunk.
The service went for an hour, and at the end they all stood to sing Amazing Grace. Xonra’s mother had given her a list of people to speak to and surreptitiously she drew it out of her purse to check and make sure she didn’t forget anyone. Xonra had offered to fly her mother here for the service, but her mother hated flying and there wasn’t time to drive so far, so it was up to Xonra to represent their little family.
She was concentrating on looking around the crowd to pinpoint the people she needed to speak to, so was startled when a large, hot hand rested on her thigh.
“Glenn Hilton. My grandparents farmed right alongside MaryAnne’s folks. How did you know her?”
Xonra looked up into the most delicious pair of warm, liquid eyes—melted rich, dark chocolate. Felt herself drowning in them. Her core clenching, cream soaking her panties. A chiseled chin, high cheekbones, hair just touching his collar, with those enticing little hints of gray here and there.
Hoping she wasn’t drooling, she replied, “Xonra Gibson. MaryAnne was a wonderful help to my mother when we moved here from upstate after my dad died.”
The man sitting beside Glenn leaned forward, his hand out to shake hers. “Morgan McLean, Glenn’s partner.”
Well damn. Not six kids but just as unattainable. Why are all the best looking ones taken?
Because when everyone else was out fucking like bunnies you were sitting in the office accumulating those billable hours and climbing the corporate ladder. Your choice, remember?
Yeah, okay, shut up.
As the people in their row gradually moved out into another room for cups of tea and coffee, the men stayed at Xonra’s side, talking quietly about MaryAnne and the service. One part of her brain was searching the crowd for the people she needed to give her Mom’s good wishes to, the other was hoping she didn’t sound like a lovesick teenager, as every nerve ending was alive to their attentions.
When Glenn rested his large hand gently on her back, Xonra’s panties dampened even more. If he wasn’t taken I’d seriously be considering a one-night stand. “Hot” isn’t even close to how he makes me feel.
Morgan offered to get her a cup of coffee, but Xonra declined and slipped through the crowd to talk to her mother’s friends. It was nearly an hour later that she was ready to leave, and stopped at the table by the door to sign the Bereavement Book and pick up a program to send to her mom.
Glenn and Morgan appeared from nowhere, smoothly moving to stand one either side of her.
“Can we offer you a ride somewhere?”
“Or walk you to your car?”
She stared at Glenn, then Morgan. “I’m only parked a couple of blocks away and I’m fine to walk that far.”
“I’m surprised you found a parking space so easily. We’re about five blocks over,” said Morgan.
“Yeah, well my hood and front seat are legally parked, the rest of the car, maybe not. Hopefully it’ll be okay. Or I’ll just pay the fine.”
“They’re pretty quick to clamp your car around here,” said Glenn. “Show us the way.”
She set a brisk pace back to her car, and sure enough, it was clamped. Xonra ripped the sticker off her windscreen, pulled her cell phone out of her purse and dialed the number. Only to get a recorded message telling her to call back after eight a.m.
Suddenly suspicious, she turned to the men. “Did you set this up? I’ve never met you before and now you’re sticking to me like white on rice.
“We wanted to get to know you better, invite you out for a coffee or something.”
“I came here to a memorial service last year and got clamped. That’s why we’re not surprised,” said Morgan.
“Also why we parked five blocks over. We didn’t plan on getting clamped again,” added Glenn.
“Okay, whatever. You can both go home now. I’m calling a taxi.”
“Let us take you home, instead. Please.”
One look into the pleading eyes and her bones, and resistance, melted like water. Her belly clenched and her body thrummed with the need to be held, to be fucked, by this man—these men. With her last remaining brain cell, she said, “How do I know you’re not a couple of ax murderers?”
Buy Link: http://www.jasminejade.com/p-9113-combustion.aspx
Berengaria Brown
http://berengariasblog.blogspot.com/
http://berengariabrown.webs.com/