Welcome to author Alayna Williams who has kindly agreed to come and visit me with a guest blog and an exciting giveaway!

Torturing Your Heroine
by Alayna Williams
As writers, we're told to "murder our darlings." Don't get too attached to any part of the manuscript, and be willing to do the tough work of cutting things that we love that don't work. Be brutal.
A corollary of that rule is to be willing to torture your protagonist.
It’s tough stuff. We lovingly craft a protagonist who speaks to us. We give her strengths and weapons. We want to see her succeed,. We want her to answer the call to adventure, follow the Hero’s Journey, and return to the village with the elixir. We want the reader to root for her, just as much as we do.
But we can’t be gentle with our heroines. We can’t make it easy. It’s all to tempting to create a protagonist with few flaws, who’s virtuous and always makes the right decisions. If we really love our heroine, it’s also tempting to lob softball dilemmas at her, easy choices with few ramifications. We want her to follow the path of all that’s right and good, and we can fall into the trap of paving that road to the quest with golden bricks. We want to shelter her, make sure that her nicely-coiffed hair stays dry and her armor all spit-shiny.
A perfect heroine does not grow. Decisions and missions that are too easy will not challenge her. Or the reader.
To be certain, we want our protagonist to have the tools she needs to succeed: a power, a weapon, pluck, strength. But she needs to bear some flaws. Be human. Make mistakes. Learn from them. In Joseph Campbell’s Hero’s Journey, the hero is called to adventure. And the hero often refuses the call. The hero may fall into the arms of temptation. Atone for past sins.
And our protagonist must face monsters, inner conflicts and external obstacles. Campbell calls this the “Road of Trials.” It’s common in myth for the heroine to fail. And that’s what can make writers uncomfortable.
Why would we want our protagonist to fail? Why would we want her to be weak, to suffer, to fall under the sway of temptation or to be ground under the heel of the enemy? Why knock her down? Why keep shoving her to the mud?
Because we want her to get back up. Because we want her to realize who she is...we want her to become something more than we imagined or created.
We want her to have a life of her own.
When a protagonist becomes autonomous in our heads, we know it. We lose control of her. She strides into situations, and we cannot predict the outcome. We can’t tell her what to do, or expect her to conform to expectations. She may slay the dragon or shack up with it. She may take that shiny sword we gave her and use it to cut off the luxurious hair we gave her. She may tell Prince Charming to go screw himself and take up with his slightly dorky footman.
When this happens, our heroine has become a creation in her own right. She may be bedraggled, muddy, and pissed off. But she’ll smile back at us, for giving her a fictional life of her own, to be ruled by her own choices...like a real person, who’s been through trials. She’s made mistakes.
But they are all her own.
And seeing her smile back at you, whole and multidimensional, is worth it.
--
Alayna Wiliams (a.k.a. Laura Bickle) has worked in the unholy trinity of politics, criminology, and technology for several years. She lives in the Midwestern U.S. with her chief muse, owned by four mostly-reformed feral cats. Writing as Laura Bickle, she's the author of EMBERS and SPARKS for Pocket - Juno Books. Writing as Alayna Williams, she's the author of DARK ORACLE and ROGUE ORACLE. More info on her urban fantasy and general nerdiness is here: www.salamanderstales.com
-- 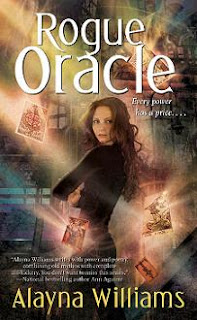 Blurb for ROGUE ORACLE:
The more you know about the future, the more there may be to fear.
Tara Sheridan is the best criminal profiler around - and the most unconventional. Trained as a forensic psychologist, Tara also specializes in Tarot card reading. But she doesn't need her divination skills to realize that the new assignment from her friend and sometime lover, Agent Harry Li, is a dangerous proposition in every way.
Former Cold War operatives, all linked to a top-secret operation tracking the disposal of nuclear weapons in Russia, are disappearing. There are no bodies, and no clues to their whereabouts. Harry suspects a conspiracy to sell arms to the highest bidder. The cards - and Tara's increasingly ominous dreams - suggest something darker. Even as Tara sorts through her feelings for Harry and her fractured relationships with the mysterious order known as Delphi's Daughters, a killer is growing more ruthless by the day. And a nightmare that began decades ago in Chernobyl will reach a terrifying endgame that not even Tara could have foreseen…
ROGUE ORACLE is available now from Amazon.com and Barnes & Noble.
Giveaway!
Alayna has very kindly offered to donate a paperback copy of ROGUE ORACLE for a giveaway.
This contest is open internationally and will close on midnight 26th March 2011 (South Australian time). The winner will be contacted the following week.
To enter you need to be a follower of this blog then leave a comment below. Don't forget to include an email address so we can contact you if you win! Good luck everyone!!