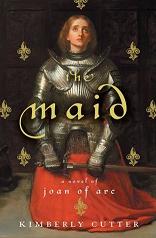 
It is the fifteenth century and the tumultuous Hundred Years War rages on. France is under siege, English soldiers tear through the countryside destroying all who cross their path, and Charles VII, the uncrowned king, has neither the strength nor the will to rally his army. And in the quiet of her parents’ garden in Lorraine, a peasant girl sees a spangle of light and hears a powerful voice speak her name. Jehanne.

The story of Jehanne d'Arc, the visionary and saint who believed she had been chosen by God, who led an army and saved her country, has captivated our imagination for centuries. But the story of Jeanne - the girl - whose sister was murdered by the English, who sought an escape from a violent father and a forced marriage, who taught herself to ride and fight, and who somehow found the courage and tenacity to convince first one, then two, then thousands to follow her, is at once thrilling, unexpected and heart-breaking. Rich with unspoken love and battlefield valor, The Maid is a novel about the power and uncertainty of faith, and the exhilarating and devastating consequences of fame. (Goodreads Synopsis)

It took me a while to decide what to write in my review for this book and how to rate it. As you will see, I went for three stars in the end and here's why.When I saw this novel on NetGalley I was keen to request the ebook ARC because Joan of Arc is one of those figures in history that really fascinate me. I have read non-fiction books about her, seen films and musicals and so I was excited to see what this novel would bring to the table.On the whole, I liked it. It came across as well researched yet didn't get bogged down in historical detail and Cutter's prose was very readable and flowed nicely making it an easy, relaxing read.The reason it got three stars and not four though was the fact that I just never really connected with Jehanne. I wanted to like her, wanted to be drawn into her story, but it just never happened and I felt at a distance from the character from start to finish. At times she even began to annoy me. But, despite this, the book was enjoyable overall and I can recommend it for fans of historical fiction.