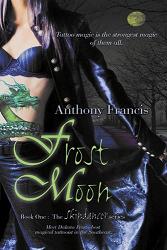 
In an alternate Atlanta where magic is practiced openly, where witches sip coffee at local cafes, shapeshifters party at urban clubs, vampires rule the southern night like gangsters, and mysterious creatures command dark caverns beneath the city, Dakota Frost's talents are coveted by all. She's the best magical tattooist in the southeast, a Skindancer, able to bring her amazing tats to life. When a serial killer begins stalking Atlanta's tattooed elite, the police and the Feds seek Dakota's help. Can she find the killer on the dark fringe of the city's Edgeworld? Among its powerful outcasts and tortured loners, what kind of enemies and allies will she attract? Will they see her as an invader, as a seducer, as an unexpected champion ... or as delicious prey? (Goodreads Synopsis)


This is a wonderfully original novel that really drew me in.

The idea of magical tattoos came across really well. It is such a fresh concept and that meant that the novel was full of surprises because I wasn't anticipating what would happen based on the pre-conceived ideas used in many paranormal romance and urban fantasy pieces. Sure, there are the usual vampires and weres too, but it never became clichéd.

Dakota Frost is a larger than life heroine who really fills the page and helps engage the reader. I thought her interactions with others were all well-written and believable. I found the character of Cinnamon a tad annoying, but I think that was mainly due to her bad grammar - a pet peeve of mine.

The story was well paced with plenty of suspense and several twists that I didn't see coming. This is the first book in a planned series and it has certainly captured my interest enough to make me want to read the next instalment.

Check this out if you are looking for an urban fantasy novel with something new to offer!