Today, I would like to welcome Greg X Graves, author of the amusing Bears, Recycling and Confusing Time Paradoxes (read my review here). Hi Greg and thanks for coming over.

1) Perhaps you would like to tell readers a little more about you and your writing in general?

Well, we're both brown-eyed, long-haired and astrological Tauruses, which is actually kind of weird when you think about it because my stories are born all year long.

2) Where do you draw inspirations for your stories?

From everything everywhere everytime.  The fingers-on-the-keyboard bits is the end of creation.  Keeping my eyes open is the beginning and middle.  It's a lifestyle more than an occupation.  For example, if a friend of a friend mentions that last week he was turned into a werewolf?  There's a story.  If I'm waiting in line at the grocery store and a robot climbs out of a time machine and describes that time that robots developed a collective consciousness?  There's a story.  If I go out drinking with the aspect of an Ancient Evil that can interact with our material plane (and absolutely demolish vodka shots)?  Well, that wouldn't get turned into a story.  It's embarrassing that I could get drunk under the table by a tentacle without a liver.

3) Which is your favourite story from the book and why?

Probably "Cake."  It contains everything good in both life and fiction: gigantic robots who, but for the grace of a single logic gate, would kill all humans; drama; cake; science.

I hope that readers get a smile, chuckle, or chortle.  Or, if they're really humorless bastards, that they scowl more lightly for a few moments.

5) When did you know you wanted to be a writer and what has been the highlight of your career so far?

When I was a little kid I practically lived at the library, so it began gestating early.  I sitll have a few real page-turners that I wrote when I was in grade school.

Around 2003 I began to pretentiously carry a Moleskine, which I think is the moment of conception of my writing career.  I started to write deliberately around that time, but not regularly.  I think that deliberateness and regularity have to be present in equal amounts.  To be honest, I didn't notice that the two had come together until several months into the Moral Guide, and by then writing had become a habit.

The highlight of my career is whenever anybody tells me that they read and enjoyed a story that I wrote.  Seriously.  It blows my mind every time.

I was homeschooled until I was sixteen. 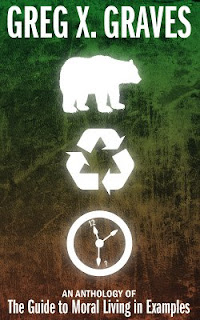 7) What are you working on at present? Are then any new releases in the coming months?

I'm continuing the Guide to Moral Living in Examples into the foreseeable future, and continuing the serialized novel Codex Nekromantia on my site.  There's also an ultra-secret project that you're not even supposed to be aware exists, so forget that I just wrote that.

Codex Nekromantia will be getting a print and ebook release by 1889 Labs at the end of the summer.

Please go to http://www.gregxgraves.com/ to leave your comments, compliments, and complaints. Preferably all at once.

The Giveaway
Greg and 1889 Labs are kindly offering e-book copies of Bears, Recycling and Confusing Time Paradoxes to two lucky readers.
Here are the rules:
1) Open internationally
2) Be a follower to enter
3) Leave a comment on this post for your entry
4) Don't forget to include your email address
5) Ends 15th May 2011
Good luck everyone!