Today I am joined by author Heather Lin for an interview. Heather has a new release to tell you all about....

1) Tell us a bit about yourself and your writing in general
I've been writing as long as I've been able to hold a pencil. I've always had an interest in romance, but I didn't read my first “trashy” romance until I was seventeen. After I finished, I thought to myself "Hey, I could do this." So I began writing romantic short stories, and after I discovered the great market for the good bits (a.k.a. the sex) I dove into the world of erotica and had several short stories published. Westridge is my first publication that I can say has more plot than sex, and it's my favorite piece of writing so far.
As for my non-writing persona, I'm living in Delaware with my amazingly supportive fiancé. I graduated from college last year with a degree in English Literary Studies, and now I'm working at a bookstore. I'm paying my bills, getting married next year, and writing. So everything's pretty peachy at the moment. :)
2) When did you know you wanted to be a writer?
I was probably eighteen when I realized it might be a possible career goal. I knew I couldn't make a living off of poetry (although I still enjoy writing it), but once I found romance, I knew I'd found a doorway into doing what I love for a living. I always knew I'd write, even if I had to have a day job, and that's where I'm at right now—holding down a job at the bookstore and writing on the side. But I'm still hoping to work my way up, get that bestseller, and be able to concentrate solely on writing.
3) What or who inspires you most in your writing?
My fiancé taught me everything I know about love and romance, so I supposed I have him to thank for most of it. I'm often inspired by music ("Mary's Song" by Taylor Swift inspired Westridge), and I often look to other writers to keep my confidence up. If they can do it, I can do it, right? And I have to give some credit to Carly Phillips, of course, since her book, The Bachelor, was the first romance novel I ever read.
4) What has been the highlight of your career as a writer so far?
I just found out last week that Westridge will be going into print! Knowing that I'm going to be able to hold my very own book in my very own hands is absolutely amazing. There's nothing like it.
5) When you're not writing, what books do you like to read?
I try to switch between light and heavy reads. I might read a romance, then Alice Wonderland or The Lord of the Rings. I'm a big fan of the Sci-fi/Fantasy genres. Right now, I'm reading Kushiel's Dart. Next on my list is Lucky Charm by Carly Phillips, then Game of Thrones by George R. R. Martin. 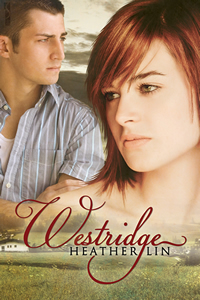