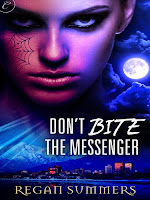 The vampire population may have created an economic boom in Alaska, but their altered energy field fries most technology. They rely on hard-living—and short-lived—couriers to get business done...couriers like Sydney Kildare.

Sydney has survived to the ripe old age of twenty-six by being careful. She's careful when navigating her tempestuous clients, outrunning hijackers and avoiding anyone who might distract her from her plan of retiring young to a tropical, vampire-free island.

Her attitude—and immunity to vampires' allure—have made her the target of a faction of vampires trying to reclaim their territory. Her only ally is Malcolm Kelly, a secretive charmer with the uncanny habit of showing up whenever she's in trouble. Caught in the middle of a vampire turf war, Sydney has to count on Malcolm to help her survive, or the only place she'll retire is her grave... (Goodreads Synopsis)

This is a 90 page novella/short novel that I read in one go over the space of an hour. I have been unsure quite how to rate this one but have opted for a three stars in the end. Let me start with the good aspects of the book and the reason for the three star rating.
What I loved about this book was the brilliant and original premise. It is what caught my interest when I first requested the book and is the reason I read to the end. A world of vampire businessmen and human couriers is a great idea and could have lead to an amazing read—but for me something just fell a little flat.
I enjoyed the characters of Sydney and Malcolm and I found no major faults with the writing style of the author, but I thought the book needed to be longer. The opening was well paced but then from the middle to the end there was this sudden rush and it felt like a lot of information and character development was missing. I think there was potentially more to this story than was told and it could easily have been a full-length novel with a little more work.
The ending of the story left things open for a sequel, but I would have preferred one longer, well thought-out and developed novel than a series of novellas. It just seems a waste of what is a great plot idea.
But this is still a fine little read if you are looking for a short paranormal piece to fill an odd hour or two as the premise really is quite clever.