Today I welcome author Mary Pauline Lowry to the blog. Mary has written an interesting guest post for us about her work as a screenwriter, and she is also offering a print copy of her latest release to one lucky reader. To find out more, keep reading! Over to Mary....

I’m what you would call an accidental screenwriter. I always wanted to write novels and short stories and I never gave much of a thought to film. But when my yet-to-be-released novel The Gods of Fire—based on my experiences as a forest firefighter—was optioned for film, the producer asked me to write the screenplay.

Having my unpublished novel optioned for film by a great producer felt like a miracle. I was excited, thrilled and very intimidated. I mean, I started reading novels only after having read hundreds and hundreds of them. And there I was being asked to write a script when I’d barely ever even read one. I immediately started studying scripts of films I love and reading all about the film industry. I soon learned a shocking fact—only 10% of major motion pictures are written by women!

That daunting statistic made me firmer in my resolve to write a great screenplay adaptation of my first novel. I learned right away that screenwriting is very different from writing novels in a key way—it’s collaborative. When I write a novel, I’m alone with it for years before I show it to anyone. But as soon as I finished a draft of my screenplay, I sent it to my producers and they sent it back to me with notes on what to revise.  I did the revisions, sent it back and then received….more notes! That went on for a couple of years.

Now the script is finally done and director Peyton Wilson has been attached to the project. Wilson directed an amazing documentary called Speed and Angels about a female fighter pilot, so she understands the dynamics of a story about a woman in a man’s world. My script is going to be sent out to female lead actors next week. So women I’ve seen on the big screen will be reading my script!

In the meantime, I’ve published my novel The Earthquake Machine, a wild little fairytale with teeth about a girl who runs away from home, transforms her appearance so she can “pass” as a boy, and travels deep into interior Mexico to find her family’s yardman Jésus. It’s a wild story and not for the faint of heart. But it’s perfect for any woman or girl tired of the limitations imposed by gender, sick of love triangles, or merely eager to read something fresh and exhilarating and fun. 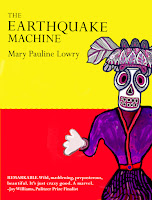 The book every girl should read,
and every girl’s parents hope she’ll never read.

The Earthquake Machine tells the story of 14 year-old Rhonda. On the outside, everything looks perfect in Rhonda’s world, but at home Rhonda has to deal with a manipulative father who keeps her mentally ill mother hooked on pharmaceuticals. The only reliable person in Rhonda’s life is her family’s Mexican yardman, Jesús. But when the INS deports Jesús back to his home state of Oaxaca, Rhonda is left alone with her increasingly painful family situation.

Determined to find her friend Jésus, Rhonda seizes an opportunity to run away during a camping trip with friends to Big Bend National Park. She swims to the Mexican side of the Rio Grande and makes her way to the border town of Milagros, Mexico. There a peyote- addled bartender convinces her she won’t be safe traveling alone into the country’s interior. So with the bartender’s help, Rhonda cuts her hair and assumes the identity of a Mexican boy named Angel. She then sets off on a burro across the desert to look for Jesús. Thus begins a wild adventure that fulfills the longing of readers eager for a brave and brazen female protagonist.

Mary Pauline Lowry has worked as a forest firefighter, screenwriter, open water lifeguard, construction worker, and advocate in the movement to end violence against women. Due to no fault of her sweet parents, at 15 she ran away from home and made it all the way to Matamoros, Mexico. She believes girls should make art, have adventures, and read books that show them the way.

The Giveaway
Mary is offering a print copy of The Earthquake Machine to ONE lucky reader.
The giveaway is open to international entries and anyone over 13 years of age can join in. Just fill in the Rafflecopter below.