Meeting Charlaine Harris: A Report from a Fan 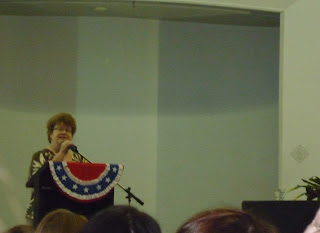 Yesterday evening, I had the good fortune to attend a talk and book signing by the amazing Charlaine Harris. Yes, Charlaine Harris actually came to Adelaide, a town that rarely gets the major events and big stars. What's more, the tickets for the evening, hosted by Dymocks, were an unbelievable $10 and that covered the talk, the signing and wine and nibbles. A complete bargain in my opinion.

Anyway, Corey and I arrived just as they opened the doors, so we joined the queue going in. We managed to get seats about halfway back and settled down. At first, it looked like Charlaine would sign both before and after, but then we learnt she would sign stock before and do personal signings after. So, what else to do but grab a glass of red?

At 6:30pm, Charlaine was announced and from the moment she came on stage, you could tell how down to earth she was. She established an instant rapport with the audience and began taking questions. It was really great to hear her thoughts on writing and on the adaptation of her books for television and she did confirm that book 13 will be the last in the Sookie Stackhouse series.

Once the talk was over, there was a mad rush to queue up for signings, so much so that three seperate queues formed. Corey went to get another glass of wine and some more food while he waited, but I joined the queue and got ready for the long wait. Luckily, I got chatting to a lovely woman next to me called Anne, so that helped pass the time. 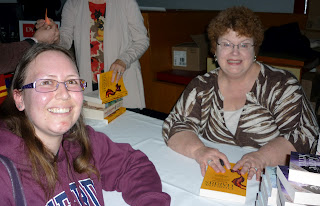 It took an hour, but finally I reached the front of the queue and got to meet Charlaine. She signed my copy of Deadlocked and gave me some encouragement when I told her I was trying to become a writer. Not wanting to end the evening yet, Corey, Anne and I went for a hot chocolate and chatted on about books and British TV comedy shows. It was the perfect end to a fantastic evening.