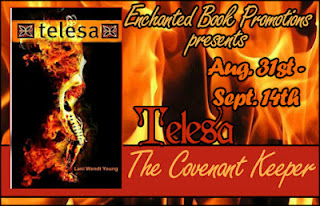 Today I am hosting an excerpt post for Telesa: The Covenant Keeper by Lani Wendt Young.

Read on more more information on the book, the author and, of course, that sneak peek extract.

When Leila moves to her new home, all she wants is a family, a place to belong. Instead she discovers the local ancient myths of the telesa spirit women are more than just scary stories. The more she finds out about her heritage, the more sinister her new home turns out to be. Embraced by a Covenant Sisterhood of earth's elemental guardians - what will Leila choose? Her fiery birthright as a telesa? Or will she choose the boy who offers her his heart? Daniel - stamped with the distinctive tattoo markings of a noble Pacific warrior and willing to risk everything for the chance to be with her. Can their love stand against the Covenant Keeper?

A thriller-romance with a difference. If you enjoyed Twilight, then you will be enthralled by Telesa as it blends the richness of Pacific mythology into a contemporary young adult love story that will stay with you long after you have turned the final page.

About the Telesa Trilogy

Lani self-published her second book ‘Telesa: The Covenant Keeper’ as an electronic book in October 2011 – a first for a Samoan author. Telesa is the first book in a Young Adult contemporary Fantasy series set in Samoa and within two months, it had reached number one on the Top Rated Fantasy Romance List on Amazon, the world’s largest e-book distributor.  On June 10th 2012, the second book in the series, ‘When Water Burns’  was launched on Amazon, making it to Amazon’s ‘Hot New Releases’ listing within the first 48 hours. Both books 1 and 2 are also available in print books. The third book, ‘The Bone Bearer’
will be released in early 2013.

Lani uses a variety of social media to market, distribute and promote her writing, taking it to a global audience.  The multi-visual marketing campaign for  Telesa showcased a wide variety of Pacific talent  as Lani collaborated with ‘up and coming’ innovators  in the fields of photography, film, dance, art design, sports, modeling, bone carving, music, and fashion.

Lani is a Samoan-NZ writer who blogs as a (slightly Demented) Domestic Goddess at Sleepless in Samoa. Her award-winning short fiction has been published in collections in NZ, Australia and the UK.  In 2009, Lani was commissioned to research and write her first book, the narrative non-fiction account of the disaster which devastated the islands of Samoa, American Samoa and Northern Tonga.  The printing of ‘Pacific Tsunami –  Galu Afi’  was funded by the Australian government and all proceeds from the book go to survivors who shared their stories for the project.

Lani is married to Darren Young (who is probably the most patient man alive) and when she’s not writing blogging, Tweeting, Facebooking, getting depressed about a two star book rating on Goodreads, and ecstatic about a rave review on Amazon - she’s the full-time mother to her five fabulous children. (Who are also very patient people)

And that’s when it hit me. As I stood and watched my mother’s house burn to the ground. The permanence. The finality of it. My mother was dead. And in spite of all her failings and craziness, I loved her. I missed her.

I sank to my knees amidst the wet greenness of the gardenia bushes and wept. For the first time since that day by the ocean-side, I mourned for my mother. I cried for the years we never had. I cried because I knew that if she had lived, we would still be on opposite sides of the telesa divide. Because sometimes, even love is not enough to hold two people together.

The white perfume of Nafanua’s gardenia flowers was a gentle embrace in the night. There was a loud crackling roar as the last of the central beams of the burning house gave way, crashing to the ground in an explosion of fireworks/jittery sparks. I looked up and that’s when I saw her.

Sarona. Standing across from me on the opposite side of the blaze, staring at me. Smiling at my tears.  Unnoticed by anyone else in the bustle of firefighting. She waved at me once before turning to snap her fingers. A whip wire of lightning seared the heavens striking the fire truck nearest to me. It exploded sending charred steel and wire debris flying in every direction. People screamed and ducked for cover. The force of the explosion was a wave of heat that hit me, had me tumbling backwards, shielding my face, rolling on the ground for several feet before coming to a breathless halt back beside my Jeep. It hurt. But not as much as my pride. I had let her see me vulnerable. I picked myself up, searching for the woman in green.

She was gone. Score? One for Sarona. Zero for Leila.

And Daniel still hadn’t called me. This day officially sucked.