Today I welcome author Scott Haworth to the blog. Scott is here to share any excerpt from his latest release, American Liberation Front, so without further ado.... 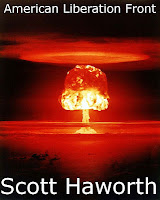 The end of Los Angeles is only the beginning for Nick and Shane Wenzel. They mourn together after a nuclear terrorist attack claims the lives of their parents. Their responses to the tragedy soon set them on different paths. Nick moves to Ohio to live with his estranged uncle. Governor Serge Bough’s demand for a crusade against the Arab nations appeals to the young man. Shane joins a student organization opposed to the civil rights abuses that stem from the new security crackdown. As the world economy crumbles, Shane’s ideology becomes a minority viewpoint. Serge Bough’s Progressive Conservative Party steadily wins representation in the government. When Bough seizes absolute power, Shane joins a resistance movement known as the American Liberation Front. He must fight against a powerful totalitarian regime that includes his own brother.


“New video from L.A.?” Nick asked.
As he asked the question he realized his own mistake.  He had seen the bended mushroom cloud that had formed over downtown Los Angeles.  The cloud on the television screen was much different looking.  It seemed full and symmetrical in comparison.  It looked like a perfect explosion, similar to what was always shown during Cold War documentaries.
“It’s Tehran,” Shane said angrily as he pushed past Nick to enter the living room.  “They don’t have any footage from Mashhad or Shiraz yet.”
Nick realized his early morning departure was not the only reason his brother was so angry.  He moved far enough into the living room to see the headline below the image: Iranian cities devastated by U.S. nuclear attack.
Though the headline lacked ambiguity, Nick felt obligated to ask the question anyway, “We nuked them?”
“And then some,” Shane scoffed.  “President Dawson took the massive retaliation doctrine a little too literally.  They killed tens of thousands of us so we’ll murder tens of millions of them.  Never mind the fact that they only have a handful of crude atomic bombs.  Never mind the fact that there has been no evidence presented that proves Iran was responsible.  Never mind the fact that their civilians sure as hell weren’t responsible!” Shane turned away from the images on the screen as if they were physically harming him.  He wiped the tears off his face with the palm of his hand.
Sgt. Brown’s final words echoed in Nick’s head.  There was really not going to be any war, not in a traditional sense anyway.  As he watched the images on the television screen, he had a very different reaction than that of his brother.  He knew many people had just been killed, although the estimates of twelve million dead would not come out for several weeks.  Nick was not appalled like his brother.  A surge of pleasure pulsed throughout his body.  Justice was being served.  His only negative feelings came from knowing that he would not be able to be a part of the retribution.
“They started this,” Nick said coldly.  The anger he felt dwarfed the intimidating confrontation he had just had with Shane.  “Those civilians supported the government that killed mom and dad.”
“It was a theocracy!” Shane emphatically shouted.  “They didn’t have a choice.  Democratic movements inside Iran were systematically crushed.  Most people there are like most people here.  They just want to keep to themselves and live their lives,” Shane paused and forced himself to soften his tone.  His brother was not the reason he was mad.  “Mom and dad wouldn’t have wanted this.  It’s mass murder in the name of vengeance.”
Nick was not so sure his parents would disagree with the retaliation, particularly his father.  He did not bother to argue the point.  At that moment he did not really care what his parents would have wanted.  He was happy with the outcome, and that was all that mattered.
“Well, at least Iran won’t be stupid enough to attack us again.  Or any of the other Muslims for that matter,” Nick said to his brother.
Shane snorted before responding, “No, of course they won’t.  We should have tried this a long time ago.  Attack us and we’ll annihilate your entire civilization.  That’s a hell of a deterrent.”
“At least it’s over,” Nick scoffed.  He was getting increasingly irritated by Shane’s point of view.
“Over?” Shane asked rhetorically.  “Four cities destroyed by nukes, two key economies devastated and millions of people dead or dying.  It’s not over.  It’s not anywhere near over.”

I graduated from The Ohio State University in 2004 with a degree in history and political science. Six months later I decided I wanted to be a writer, which made the degree largely worthless. By my estimate, I will need to sell another 13653 ebooks to pay off my student loans. So... if you could recommend me to your friends that'd be super.

I have written six novels in genres ranging from science fiction to political satire. I tried combining the two genres once, but I didn't think anyone would care about a sex scandel involving the President of Blargon 7.

When not writing, I enjoy being asleep.

I currently live in central Ohio, or as you might know it better as, "that state I fly over on my way to a state I care about."