Today I am joined by author Ally Malinenko to tell us a bit more about her latest Lizzy Speare release. Over to you, Ally.... 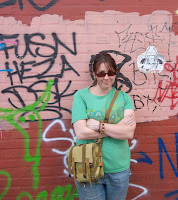 When the alarm goes off, I roll over pretending that it didn’t happen. My husband leans over. Five more minute, I grunt. Please. He acquiesces. It’s 5 am. It’s a weekday. Therefore, it’s time to write.

It wasn’t my idea to write at five in the morning. I would never have an idea as ludicrous, as crazy, as sleep-depriving as, well I’ll say it, stupid as that. It was my husband’s idea. I just went along with it because clearly I hate myself….and sleep.

I started writing my novel Lizzy Speare and the Cursed Tomb at night. Night is a good time to write, I thought to myself. I would sit down at my desk near the window, put on some classical music in my Walkman (yes this was pre-iPod) and try to drown out the pre-teen hoodlums who roam the streets of my Brooklyn neighborhood looking for even more noise to make. And it worked, at least, for a while.

It was my husband, also a writer, who started getting up early. I happily stayed in bed, all snug and warm as he trudged out to the kitchen, banged though the cabinets searching for coffee. I would hear the computer whir to life, as I rolled over into my dreamland.

Then he talked about it more and more. How great it felt to know that no matter what happens during the day, you got YOUR work done. No matter what the job is like or the commute or the crazies on the street, you got up and produced SOMETHING. You made Art. It sounded good. Too good. I gave it a try.

Now, five years later I can’t even bear to think of counting the cumulative hours of sleep that I’ve lost. Sometimes I think it’s killing me slowly. Sometimes I hate that I can’t keep my head up, that my book will fall into my lap as I doze off on a weeknight by 10 pm. But then each morning, I turn on WQXR, the classical music station, I get a cup of tea, I sit down at my desk and I work. I write and create characters. I compose dialogue. I write adventures. The kind of adventures I would have loved when I was 11 ½.

And I wonder briefly how I could have thought, for even one second, that this was a stupid idea.

…a normal twelve year old girl with a talent for writing, who has a very notnormal family secret. And when Lizzy’s father vanishes, that secret will change her life in ways unimagined. (Spoiler Alert! It turns out that Lizzy, or Elizabeth S. Speare, is the last living descendent of William Shakespeare. Shhh! Don’t tell anybody!)

Then Lizzy and her best friend Sammy are kidnapped, awakening in the faraway land of Manhattan. Their host is Jonathan Muse, whose job is to protect Lizzy from becoming the latest victim in a family feud going back nearly five hundred years. Is that why the mysterious, eye patch-wearing Dmitri Marlowe is after her? (Spoiler Alert 2—he’s the last living descendant of Christopher Marlowe, a friend and rival of Shakespeare’s. But keep it to yourself!) Is Marlowe after Lizzy’s family fortune rumored to be kept in the tomb of that bald guy with the goatee? Does he seek artistic immortality? Or Revenge (with a capital R) for a death long, long ago?

In a dangerous game of cat-and-mouse, Lizzy and Sammy are thrust into the realm of the mythical and fantastic—from satyrs and Cyclopses to Middle Eastern cab drivers and Brooklyn hipsters in what is truly “an improbable fiction” as the Bard himself once wrote.

Ally Malinenko, a self-proclaimed Bardolator, took her first pilgrimage to Stratford-Upon-Avon in 2009 and hasn’t been the same since. Her poetry book, The Wanting Bone, was published by six gallery press. She blogs at allymalinenko.com. Ally lives in Brooklyn with her husband.