Today I welcome author David M. Brown to the blog. Over to you, David.... 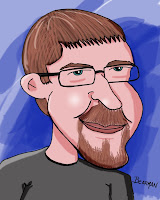 I first started writing in 1999 when I was at college. I set out to build a fantasy world, beginning as a solitary world map, and from there I developed the histories of twenty-three lands, spread across twenty-five ages and with more than five hundred accompanying maps. As I built that history, ideas for novels inevitably came to me but from many sources.

My first book, Fezariu’s Epiphany, came into being when the history was being built. In the early centuries a group of hired hands known as the Merelax Mercenaries appeared frequently but they never had a prominent role. I wanted to know more about them and Fezariu was the one that came forward to join them and experience their way of life. The novel began very simply with that plotline but as the months passed it gained far more substance until it reached the stage where Fezariu’s joining of the mercenaries was actually a secondary element in the story. His upbringing and abandonment by his mother became far more important. I was surprised at this change but I’m glad it happened.

The same was true of my next book, A World Apart. This story began with a basic idea. I wanted either two friends or lovers in their teens who are separated (I didn’t know how yet!) and don’t see one another for years. When they next meet they are enemies. Sounds very simple, doesn’t it? And you would be right. From that small acorn though came a much more in-depth story about three friends – Demetrius, Eleyna and Halcyon – who grow up together but are separated in their late teens. Demetrius becomes a renowned soldier, while Eleyna and Halcyon descend down a darker path and become the outlaws Demetrius later has to hunt down and kill. The small matter of an unresolved love triangle between the friends, pirates and magic certainly throws a problem or two into the mix.

I’ve just finished the first draft of Ansel’s Remorse and the story for that book came from listening to music. I enjoy musicals and one day was listening to the soundtrack to Andrew Lloyd Webber’s The Phantom of the Opera. Christine Daae is in a graveyard and the Phantom appears singing, “Wandering child so lost, so helpless, yearning for my guidance.” I pictured the scene in my mind but didn’t see Christine or the Phantom. Instead I saw Celestia weeping by the grave of her lost lover, Lorenzo. Watching from a distance is Lorenzo who has returned but is no longer human. This particular story has had quite a journey. That idea developed into a short story – The Sparkling Dew on the Lakeside – which I intended to turn into a novel. In the weeks leading up to starting that book, Lorenzo and Celestia’s story was pushed into the background, a mere side story, and in its place came Ansel and Palatine, two friends, one a Duke, one a servant who are exiled by their king for treachery and condemned to the accursed land of Deutermia where no one survives. Ansel and Palatine do survive though and when they return centuries later, they are no longer human.

Later this year I will begin work on my fourth book – The Stars Beneath the Parapets. Three songs played a key role in the development of this novel. One day I was listening to The Decemberists’ On the Bus Mall which tells the story of two young friends surviving on the streets. I saw a brother and sister – Sebastian and Leila – but I didn’t know much about them at that point, only that they were surviving on the streets for some reason. Simon and Garfunkel’s The Sound of Silence, which evokes a multitude of emotions whenever I hear it, gave me the idea of Sebastian and Leila leaving behind all they once knew, a lucrative life, and entering a world they knew little of before. I could picture a vast, sprawling city with forgotten slums far beneath. The final song that played a big part in this novel was David Bowie’s Lady Stardust. Bowie’s Ziggy Stardust album in general had a big impact as I listened to it, especially Five Years, but Lady Stardust added a new element to my novel, one that helped shape the paths of Sebastian and Leila who begin the story very close but go in different directions as the book progresses.

Each day I wonder where my next idea will come from. I do believe that all writers stand on a different plain to other people, not a better one, but perhaps a more inquisitive one. They are always observing and listening, taking in the world around them and remembering the many sensations they each experience. I often think I’m not as observant as I could be but there are many seemingly mundane things I can recall such as a conversation I overhead at a train station years ago. I can remember brief incidents like that as if they were only yesterday, yet struggle to remember the names of many people I was at school with. I only spent five years in the same class as them!

My advice to writers in search of inspiration is to always keep your eyes, ears and mind open. A walk down the street, reading a good book, overhearing conversations in a coffee shop, listening to music or watching a movie, all of these environments can give rise to your next idea for a book. Billions of different stories are being told every day. We just need to be ready to find them.

Author Bio
David Brown could be considered a fantasy fanatic, especially since he has spent the last 10 years developing a 47,000-year history for his fictional world of Elenchera. When converting his obsession into literary form, David commits himself to a rigorous writing and editing process before his work can meet his approval. Combined with the critical eye of his wife and a BA Hons in History and English, David's dedication leads him to his goal of inspiring readers through heartfelt stories and characters.

A World Apart
Demetrius makes his first mistake when he lets his best friend Halcyon marry Eleyna, the love of his life, without saying a word. On the day of the wedding, he walks away from the Elencheran town of Dove's Meadow and joins the army.

He makes his second mistake when the pirate Black Iris tricks him into letting dozens of men, women and children die in a fire. Demetrius is imprisoned in grief and disgrace.

But he can atone. The Black Iris is dead. The Ivory Rose has risen to the top of the pirates and is leading brutal raids on the coast. If Demetrius can capture and kill her, he'll win his pardon.

And then Demetrius discovers the Ivory Rose is Eleyna. He must decide which will be his third mistake: losing his last chance at a pardon or destroying the one woman he's ever loved.