Today I am joining with Enchanted Book Promotions to celebrate the release of Communion by B. Patterson.

Read on for more info on this new release, including an excerpt.... 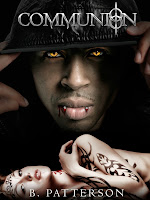 Lester Fuller knows isolation well.  It has been his only friend since Jadarius Singleton humiliated him last year.  But one night after Jadarius's taunts go too far, Lester stumbles upon Gwynn's body.  He's sure she's dead.  Until she bites him.
Vampires are extinct.  There are only the dhampir.
Now something more than human, Lester struggles to determine where he fits in this new society.  Just what secrets about the dhampir are his friends keeping from him?  And what will he do when a notorious figure from dhampir history sets her eyes on him?


Roman glared at me, and then moved on to our target.  I jumped out of the creek and followed him.
The man’s feet slapped against the pavement, half-way across the overpass.
Roman crouched down a few feet below the top of the incline which, at its peak, turned from earth to pavement.
“No time to prep,” Roman said hurriedly.  “Grab him once he’s above us.”
“But I—”
“He’s yours,” Roman said low and fast.  His tone ended the conversation.
I focused on the man, positioning myself to run and grab.  Lacking instruction, I would have to rely on instinct.  I listened for any approaching cars.  None were in the immediate vicinity.  But I could hear one coming from further along on the northbound side, opposite us and the man.  Here’s hoping the driver and passengers weren’t watching him.
His foot crossed the overpass and I dashed for him.  Not sure what else to grab, I pulled him down the hill by his arm.  I got a better hold on his body as we both tumbled down.
Face to face with him, it only took me a moment to recognize him without the glasses.  It was my English teacher, Mr. Taiffer!
The shock lasted until we rolled smack into a tree.  Panic replaced it.  He screamed and pushed off from me, trying to stand.
“Bite him Les!”
I rose with Mr. Taiffer and yanked him back towards me.  He punched.  Compared to Gwynn’s, it was like watching it move in slow motion.  I caught it with my free hand and then pulled him closer.  I held his arms with both hands and our chests smashed together.
“Lester Fuller?” he said incredulously.
I forced my fangs into his skin.  I was closer to his shoulder than his neck, but I figured it would work the same.  With my ear right beside his mouth, the peal of his screams resounded in my hearing.
The blood leaked from the newly formed holes and its warmth tickled my lips. Mr. Taiffer said some choice words.
Why was he still conscious?
Roman snatched Mr. Taiffer away.  “He’s too fucking loud.  Stop being so damn timid and really bite him!”
Roman bound both of Mr. Taiffer’s arms together with one of his and covered his mouth with the other.  I heard the low growl rumble in his throat over the muffled cries.  Roman bit his neck ravenously, letting out his frustration.  Mr. Taiffer attempted one last stifled shout, but the volume faded with his consciousness.
I don’t remember sitting down, but my back was to a tree, preventing me from moving any further.  Roman sucked so vigorously that his head twisted against the curve of Mr. Taiffer’s neck.  I was afraid to admit to myself I knew either of them.
All of a sudden, Roman’s head lifted up.  He glared at me, not completely without malice.  Blood smeared his lips and fangs.
Seeing my response to his bestiality, he pushed the body towards me.  It would have fell on top of me had Roman not held the shirt by a pinch.
“Get up.  Drink.  Now.”
I shook my head, unable to find the words.
This wasn’t how it was supposed to be.  I almost wished I did have a thirst for blood.
“What are you going to do tomorrow when your powers fade?”
I looked away.
“Les, this is how we get out powers.  You don’t become powerful without sacrifice.”
I thought of Jadarius.  And I thought of the security I felt whenever he was near, now that I had my dhampir powers to depend on.  Every day last week, I knew if he were to try something, I’d be ready for him.  Unlike our last fight in the bathroom.  If you could call it that.  My powers had faded by then and Jay made me his bitch with just one punch.
I thought of last night.  I was convinced I wanted to hit Brent but couldn’t bring myself to do it.
I grimaced at both memories.  My eyes returned to Mr. Taiffer’s limp, inviting body.
I had to get beyond this passivity.

I’m a 25 year old writer.  I’m a graduate of North Carolina State University where I majored in Psychology and minored in Japanese.  I currently live in Maryland.
I wrote a lot as a kid.  I began a new story (or 3 or 4) every school year, but rarely finished them. I finally finished one when I was 16.  It was about ninjas.  It was really bad.
Communion, my first completed novel worth publishing, will be released October 1st. I have that and many other works coming down the pipeline.  I plan to be writing for many years to come.


My values as a writer include:
Writing high-quality books
Diversity
Integrity
Entertainment