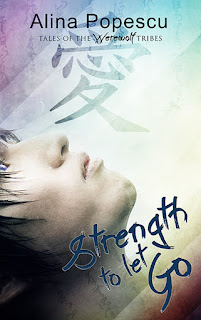 After being abandoned by his mates, Shiki Kirishima, beta of the Dragons of the Fang werewolf tribe, returns to his home in Tokyo.
Crippled by grief, Shiki decides to end it all by going into the territory of the Siberian Killers tribe and challenging them to a battle to the death.
His death.
Ganzorig, beta of the Siberian Killers, however, sees the potentially disastrous consequences of having Shiki die in battle.
Instead, he saves him.
Having suffered loss himself, Ganz takes it upon himself to help Shiki deal with his pain.
Blake, Shiki’s best friend since childhood, is as determined to show him there is life after a wolf’s ultimate loss.
Could there also be something ‘more’ for them after friendship?


Don’t miss the Tickle Me Pink sale on the Wayward Ink Publishing site, with 25% off all list prices.
WIP / Amazon US / Amazon UK /
Amazon AU / Amazon DE / ARe

When I got to my apartment, I wasn’t feeling any better. I was restless and hurting and angry as fuck and their mixed scents in my place weren’t doing me any favors. I fumbled with the backpack I had dropped on the floor of my living room, trying to find my phone. I was greeted by a dozen or more messages from Vicks, one of my twin’s mates. Since she had mated my brother she had this weird connection to me too and could feel whenever I was experiencing strong emotions for an extended period. I assumed everything that had happened since yesterday would qualify for that. I sent a quick “I’ll be fine” type of reply to stop her from harassing me and went through my contacts.
Even if I hadn’t called that particular number in a couple of months, it was still at the top of my favorites list. He was my best friend since childhood, so it made sense I’d call him more than anyone else. It just hit me then that I’d been so lost in my own life, I barely had time to catch up with him or my family unless something critical was going on. I pressed the call button and plastered the phone to my ear, pacing around the room as it rang a few times.
“Come on, Blake, fucking pick up!” I hung up and tried again. I really needed to talk to my best friend right now. It rang twice and went straight to voicemail. Hearing Blake’s voice brought tears to my eyes and something snapped inside of me.
“Blake, I wish you’d have picked up the phone.” I laughed softly, shaking my head. “It’s funny, I think this is the first time I call you and you don’t pick up. Either way… thanks for being my friend, chibi. I… I don’t….” I lowered the hand that was holding my phone and let my head fall back, taking a few deep breaths. “Blakey, tell everyone I love them and… yeah, those who know me, really know me, will understand. Sayonara, chibi-tan.”
I hung up and let the rage take over. I turned around at impossible speed and threw the phone with a loud roar. It hit the wall and shattered into a million pieces. I was crying. I knew because I could feel the heaves and tears, but the crushing pain was battling with the anger taking over my mind. I had lost my soul and my reason to live when I’d lost Kieran and Kayden. What was left of me was nothing more than the warrior inside. A true samurai would not waste away, waiting for death to claim him at the end of a miserable life. He’d die in battle, an honorable death his final legacy.
My twin, Shishou, my co-beta, Ren, my sister, even Blake… they’d get it, they’d explain it properly to my children. They probably won’t understand, just like I hadn’t when my parents had left us. I prayed that unlike their father, they would never get to a point in life where they’d understand this decision of mine. It meant they’d go through a world of pain and that was the last thing I wanted for Ryuu and Kimmie.
I took off everything but my jeans. No point in having anything else on. Werewolf rules were sometimes mind-boggling. You could shift into your wolf and back, and you always kept one item of clothing. The picks were random and you might be left in nothing but your underwear. Or keep a tight top and nothing else to cover your lower body. It was wise to choose your own clothes for the occasion. I then promptly flashed to the weapons room in the Alpha mansion, right in front of the wall display of my father’s katana. I kneeled before it, my legs spread, and then bowed deeply. Getting up, I closed the small distance between me and my objective and removed the katana. I glanced at the wakizashi he always used to wear with his katana. Double sword, traditional samurai sign. I decided I’d use them both, just as he had in his final battle. I unsheathed the two blades and adjusted my grip. With a final bow, I flashed out.
When I took form at my destination, a small shiver coursed through my body. It was pretty cold out here. Well, northern mountains in Mongolia weren’t known for their excessive heat in the middle of autumn.
I had chosen Siberian Killer territory, the fastest way to pick a fight with other werewolves. The one rule they had was any shifter that stepped foot on their territory would be killed. Here I was, standing tall, all focused, muscles bulging under the strain and excitement of an impending battle, taunting whoever was nearby.

Writer, traveler, and coffee addict, ALINA POPESCU has been in love with books all her life. She started writing when she was ten and she has always been drawn to sci-fi, fantasy, and the supernatural realm. Born and raised in Romania, she finds her inspiration in books of all genres, in movies, and the occasional manga comic book. She is a proud geek who needs her fast Internet and gadgets more than she needs air.