Book Promo: A Trip to Remember by Meg Harding (MM)

Colin wants to spend the Christmas holiday with his family, but a blizzard settles in and his flight is cancelled. Unwilling to accept this, he strikes out on his own and crashes his car. Where he ends up might be better than where he was going, though.

Logan was content to wait out the blizzard and spend the holiday alone, but when a frozen-solid Colin ends up on his doorstep he’s not going to turn him away. He takes him in and shows him Christmas spent with a stranger really doesn’t have to be awkward after all.


Left alone, and more aware of the situation than he had been since he’d woken up, Colin took the opportunity to look at the room more thoroughly. In the corner stood a large Christmas tree, the lights and ornaments all red and white, and a couple presents scattered beneath. From the mantle above the fireplace hung several stockings, and little glass reindeer were placed on the mantle itself. Christmas knickknacks were spread throughout the room, placed on shelves and tables. A spinning snowflake dangled from the ceiling fan.

“Your family was supposed to come here, weren’t they?” he asked when Logan came back into the room.

“Yeah.” He handed the wet cloth to Colin with a small smile. “They’re smart, though, they didn’t try to travel through a blizzard.” He winked, his smile turning into a pleased smirk.


Colin rolled his eyes and scrubbed the cloth along his neck, hoping he was getting everything. “Are you ever going to let that go?”


“Considering I’ve only been harping on it for about ten minutes, I think you’ve got a ways to go.” Logan sat down next to him, his hip pressing into Colin’s stomach. “Give me that. You look so pathetic.” It sounded like he was trying not to laugh. He tugged the cloth from Colin’s grip, leaning over him to start dragging it over his skin.


Colin froze for a second, his neck tilted back vulnerably. He swallowed heavily. Logan was very much in his space, his face hovering right over Colin’s. He could see the striations in his irises, the way his pupils had expanded. If he respired out his mouth, he’d be breathing right into his face. He felt like he was holding his breath.


Get a grip. He tried to subtly exhale out his nose. “I thought you weren’t going to play nurse,” he said.


“I had no idea you’d make it look so difficult,” said Logan, brushing his thumb over the skin he’d just scrubbed, soothing irritated flesh. “It seemed wrong to let you keep trying.” 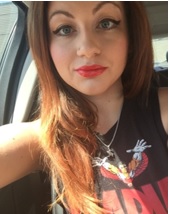 Meg Harding is a graduate of UCF, and is completing a masters program for Publishing in the UK. For as long as she can remember, writing has always been her passion, but she had an inability to ever actually finish anything. She’s immensely happy that her inability has fled and looks forward to where her mind will take her next. She’s a sucker for happy endings, the beach, and superheroes.  In her dream life she owns a wildlife conservation and is surrounded by puppies. She’s a film buff, voracious reader, and a massive geek.