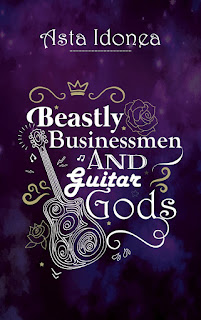 Don’t miss the March Sale!
All Wayward Ink Titles titles are 35% off on the WIP website and 30% off on AllRomance.
The 30% discount also applies to all Amazon websites for the first few days after release.


The modern age is devoid of magic. Or is it?

How else could a stolen guitar or a lost shoe lead to love?

What but magic could spark romance at a workplace assessment?

Or turn a mean-spirited monster into a man?

Six fairytales and myths are given a contemporary MM twist in this collection of stories, proving that sometimes the mundane can be magical too.

Dragged Into Love (Þrymskviða)
When Theo’s landlord steals a prized guitar in lieu of rent owed, he informs Theo he will return the instrument on one condition: he wants a date with Theo’s twin sister.

Love’s Code (Ariadne and Theseus)
Andre must pass the examination if he wants to keep his job. However, he is distracted by his unspoken love for fellow programmer, Eren.

Guessing Games (Rumplestiltskin)
Sasha told a little white lie in his job interview and it won him the role. Only now he is faced with a pile of work he doesn’t know how to complete.


Assignations and Ultimatums (The Strange Elopement of Tinirau)
Hunter and Ross are in love, but Ross’ father keeps trying to set him up with undesirable, yet powerful, older men, the latest of whom happens to be Ross’ boss.

Lost and Found (Cinderella)
Cillian is dreading the work masquerade ball, but once there he finds himself romanced by a dashing stranger, only to flee when he discovers the man's identity.


A Debt is a Debt (Beauty and the Beast)
Dunstan Griffin is not a man to let a debt slide, so when debtor Alfred Siskin offers the EA services of his son, Wynn, in lieu of payment, Dunstan accepts.

Like the song? You can find the mp3 at SoundCloud.