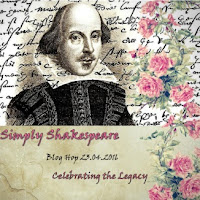 Today I am taking part in Rian's Simply Shakespeare Blog Hop. Check out all the other posts here.

I honestly can't recall my first encounter with Shakespeare; not even whether it was book, film, or stage. All I know is that I've always loved his works. I adored them throughout my grammar school days and chose Shakespeare Studies as one of my electives during the final year of my BA (hons) English with French. I've read all the plays and poems and have seen nearly all of them performed on stage or screen or both. I own three different DVD versions of Hamlet alone, and I love to reference Shakespeare in my own writing.

For the blog post today, I thought I'd share a few things. First my top ten plays, then my top ten performances, and finally a brief excerpt from a short MM story I have written, based on Coriolanus. This story will be released in a Shakespeare-themed MM anthology later this year.


And now, to finish, a little sneak peek at my Coriolanus-inspired MM short story The Devil and the Lion.

He had expected death.

Yes, now he thought about it, he realised it was true. Perhaps he had even longed for it. Deep down. A noble demise would obliterate the shame he had of late been forced to endure. What better way to die than by the hand of his greatest enemy? Yet, was that even correct anymore? Were the Volsces his enemy? Surely Rome was now the foe. And Tullus Aufidius, whom once he had longed to hunt, embraced him as a friend.

He brushed the thought aside. If Aufidius’ embrace had been too warm, his manner too passionate, the cause was like to be the wine, for he had interrupted him feasting. What was that to him in any case? All he needed to know was that his life was spared and revenge on those who’d wronged him lay within his grasp.

Caius Martius sank upon the bed and ran his hands over the rich velvet curtains. He wondered whose room he had been given. It seemed strange, such opulence in a bedchamber, and yet he supposed it was no more than inexperience of the finer things that made him think so. For years he had lived the soldier’s life, always on the move. His brief sojourns within the city walls had not been of long enough duration to allow him to dwell upon the comforts of home.

Home. There was no home for him. Not anymore. Mother, wife, and child were all perforce forsaken. And being robbed of them, he must not let his memories turn him from his path. He was a soldier, and servants of mighty Mars must needs set affection aside, or else their swords would bite naught but stale earth.