Today I welcome Louise Lyons to the blog to share the cover art and a short excerpt from her forthcoming release Červená. 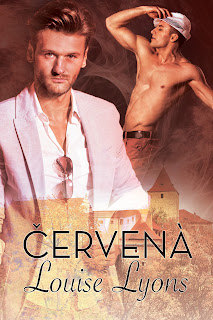 When Joel Jones finds homeless Russian, Sasha, outside his gay nightclub in Prague, he cannot find it in his heart to turn him away, so he offers him a home and a job as a dancer and stripper.
Despite a fifteen-year age gap, romance develops between them, but is interrupted when Joel has to return to England for many weeks to deal with a death in the family.
Upon Joel's return, he is horrified to discover his business partner, Karel, has gambled away the club's money and put them all at risk. Joel buys him out of the club, but when Karel continues to gamble, the people he owes pursue Joel for the debt instead—and they'll stop at nothing to get paid.
Suddenly Joel and those he cares about—especially Sasha—are in danger, and Joel finds himself with no choice but to seek the help of known criminal, Vincenc Jankovic. Ensuring a happy future for himself and Sasha will mean a struggle and some difficult decisions, but Joel is determined to protect what they've built together.

Červená releases on 22 July 2016, so look out for more info then. In the meantime, here's a short excerpt to whet your appetite.

“Who is that guy?” Karel hooked one ankle over his other knee as we waited for Sasha’s “dress rehearsal.” He’d been with us a week and that night he would take to the podium in front of hundreds of clubbers for the first time. Why did I dislike the idea of it so much?
“What do you mean? You know who he is.”
“His name’s not Sasha. I looked at the file.”
“It’s a pet name his sister gave him.”
Karel raised an eyebrow. “How well do you know him, Joel?”
“Not as well as you got to know Bohdan and Marek when they joined us.”
Karel snorted. “Have you not heard of ‘try before you buy’?”
“They audition to dance, not fuck.” I grimaced, but Karel laughed.
“They weren’t complaining.”
“Well, keep your hands off Sasha,” I snapped.
“Someone’s possessive.”
“No, I just don’t want to see you mess with him. He’s a sweet kid.”
“Right.”
I stopped talking and turned my attention to Sasha as he climbed onto the podium. He’d had his hair cut in a short crop that suited him perfectly. He’d gained three or four pounds and looked much healthier than he had when I’d found him scavenging in the yard. It was difficult to believe only a week had passed. He seemed to be fitting in well with the other boys. All five of the dancers had welcomed him with open arms, and Tomáš and Fran had taken on the role of “tutors.” They’d reported Sasha was good, but neither Karel nor I had seen him dance yet.
Sasha bit his lip and clenched his slender hands into fists as he waited for the music to start. His nervousness was obvious and I hoped he’d be okay when he got going. It wasn’t a job for everyone. We’d had two young men try out for us in the summer and neither of them had the balls when it came down to it.
Pavel started the music—a fast dance track. Sasha closed his eyes for a moment and his chest heaved as he took a breath. Then he began to move. He had perfect rhythm, swaying, bucking, and grinding with the beat, turning slowly so he’d be seen from all sides of the podium when he was doing it for real. He kept his eyes half-closed, lips parted, and gradually his face relaxed into an expression of pleasure.