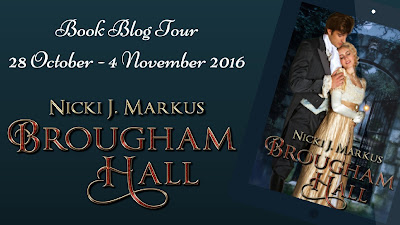 Welcome to the first day of the blog tour for my new MF PNR Historical novel Brougham Hall. Several bloggers are participating in the tour over the next week, so my thanks go out to them. Read on below for a guest post, an excerpt, and a giveaway! 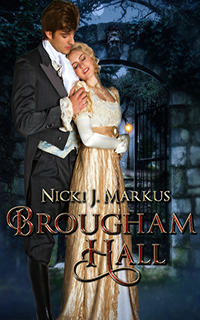 When Catherine goes to live with her highborn cousin's family at Brougham Hall, she expects restrictions on her previously free lifestyle and comments on her lack of social grace. What she does not anticipate is the loss of her heart, nor a web of dark family secrets that threaten the safety of everyone in the house.

Vampire twins Hal and James are Lord Grovely's guests. Though close in some respects, the different approach each takes to his vampiric nature puts a strain on their relationship. Having hoped for a pleasurable sojourn, they find themselves drawn into an unfolding drama in which their brotherly bond will be sorely tested.


Shakespeare and Acting at Brougham Hall
I’ve been a huge Shakespeare fan for many years and have made Shakespearean references in a number of past works, whether transparently or more obliquely, for discerning readers to find. However, in writing Brougham Hall, I knew right away that I wanted Hal and James’ past to include a stint as Shakespearean actors, to reflect overarching themes in the story. This seemed doubly appropriate given that 2016 is such an important Shakespeare anniversary year.
Brougham Hall is a story in which no one is quite what they seem, so acting is an important motif throughout the tale. Many of the characters wear masks, although their reasons for doing so are varied, ranging from the amusing to the macabre. Our heroine, Catherine (who wears a mask of her own, though to a lesser extent than other characters), must see through these façades in order to understand who is friend and who is foe in changing circumstances as darkness descends over the Christmas house party. The drama can only conclude once all truths are revealed.


You can find more information on literary influences in Brougham Hall here.
Excerpt

She shivered as she peeled off her layers of clothing. It was cold in the room now night had fallen, so she did not dawdle, wanting to get beneath the blankets and warm her frozen skin. She slipped into her shift and bed jacket, and then tucked the loose strands of her hair into her night cap. Ready at last, Catherine turned back the bed, extinguished the lamp, and climbed in.
The darkness in the room was absolute. The lack of illumination in the hallway beyond precluded even a sliver of light from entering the chamber, and Catherine found her other senses heightened by the restriction on her vision. As she lay there, she heard creaks and groans, and the wind buffeted the windowpane as it roared past. Somewhere outside, an owl hooted. Then came whispers. It sounded as if two people were talking in urgent, hushed tones. Their voices were soft at first but grew louder as they approached, even though Catherine could not make out the words they spoke.
"Who's there?" Her own voice sounded tremulous and high.
She listened, but the voices were gone. No, not gone; they had never been there to begin with. She was exhausted, and this was her first night in a strange house and an unfamiliar bed. It was natural she would feel anxious and hear things that were not there. Nonetheless, if she carried on in this manner, she would soon convince herself a ghost was hovering at the foot of her bed, and that was nothing but nonsense. With this reprimand in mind, she closed her eyes and settled down to sleep.

I am offering an eBook copy of my MF PNR short story Canção do Amor to two lucky readers. To be in with a chance to win, please comment on this post, telling me your favourite historical period. I will review comments across all participating blogs at the end of the tour and will randomly select the winners, whom I will contact privately by 6 November, as well as announcing them on my FB and Twitter feeds.
(Prize value: US$0.98 / GB£0.99)