Today's snippet comes from my MM seasonal short story, Santa for Hire, which forms part of Dreamspinner Press' 2016 Advent Calendar, Bah Humbug!, and is also available as a single title.
This scene continues on from last week's snippet, as Richard continues to contemplate the Christmas horrors ahead.

He walked over to stand in front of the plastic log cabin and grimaced. The tinsel festooned around his floor was bad enough, but this thing made his blood curdle. Cute to the point of vomiting, it represented everything Richard hated about the holidays. What was wrong with just a plain log cabin? Why did it have to be covered in glowing candy canes? And as for the flea-bitten model reindeer that looked stoned out of its brain— 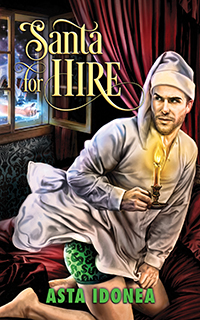 Dumped by his ex on Christmas Eve two years ago, Oxford Street department store manager Richard Barrett now hates the holidays. Things go from bad to worse when the store's usual Santa is too ill to reprise his role and the firm sends cocky but handsome Blaine Ryder to take his place. The attraction between the two is clear, but Blaine is an incorrigible player who reminds Richard of his ex. His idea of a relationship is a quick roll in the hay, and his advances have Richard running for the hills. It might take some special intervention for both of them to realize they can change enough to have a chance at a holiday romance.