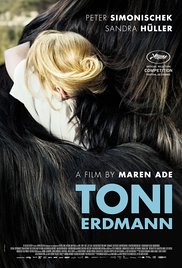 A practical joking father tries to reconnect with his hard working daughter by creating an outrageous alter ego and posing as her CEO's life coach. . (IMDB Synopsis)

I wanted to see this movie as it had received excellent reviews and would be, I thought, good practice for my German. Luckily, I won a double pass in a giveaway hosted by the Adelaide Festival Centre, so I went to a screening this morning.

Toni Erdmann is enjoyable in its way. I laughed aloud several times and appreciated the father-daughter interaction at the centre of the story. However, like so many other German dramas I've seen, the pacing was slow and plodding. Clocking in at over 2.5 hours, there was less action and excitement than I'd expected. I wasn't reduced to looking at my watch, but my mind did drift to what time it was on a couple of occasions. I also found the ending bizarre: a sudden cut to black that appeared like a playback error until the credits finally started scrolling. While I had nothing against the film, nor the leading actors' performances, I do wonder what makes this worthy of an Oscar nomination. I'm glad I saw it, as I don't get to see much German cinema (compared to say French, Italian or Scandinavian) and it's good practice for me. However, it is not a film I'd bother to watch a second time. Serious cinephiles will no doubt find something to appreciate in Toni Erdmann, but it's not a movie I would recommend to the general film-goer and I'm glad I didn't take my husband with me in the end as he really wouldn't have enjoyed it.