Today is release day for the Fairytales Slashed Volume 7 anthology from Less Than Three Press, which includes my short story, Lovers at the Lake. 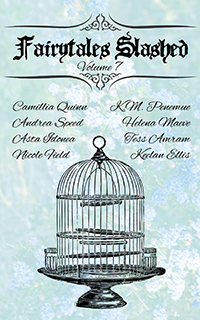 Featuring 'Lovers at the Lake' by Asta Idonea
When Prince Vladimir stumbles upon a lake and goes for a swim, he encounters Dušan. The two fall in love, but Vladimir's father wishes to marry him to a foreign princess, and when Dušan seeks help from a wood dryad, he discovers a happy ending always comes with a heavy price.

After Ever After by Nicole Field—After her fairytale wedding to Prince Phillip, Lotte comes to realize the ending she always imagined isn't what she expected. Then she meets Meg, a chambermaid in the palace, and begins to wonder if she'd been imagining the wrong happy ending all along.

Bearskin by Andrea Speed—A soldier returned from war, instead of a warm welcome Arron finds himself homeless, alone, and dying of illness alone in a cave. When a strange man makes a bet, Arron takes it: for three years he must live as an outcast, telling no one the truth. If he succeeds, he'll get a life of warmth and comfort. If he fails, he loses his soul.

No Witch's Brew by Helena Maeve—After the trenches of the Somme and a brief affair with a man well below his rank, Alistair traded the soldier's uniform for an earl's suit. Now widowed, all that stands between him and prosperity is his late wife's meddlesome boy, who has gone missing. If finding him means rekindling ties with Colm D'Arsy, avowed half-goblin and one-time flame, so be it.

Lovers at the Lake by Asta Idonea—When Prince Vladimir stumbles upon a lake and goes for a swim, he encounters Dušan. The two fall in love, but Vladimir's father wishes to marry him to a foreign princess, and when Dušan seeks help from a wood dryad, he discovers a happy ending always comes with a heavy price.

The Mercenary's Wedding by Keelan Ellis—Princess Adeline is a princess in misery, turned by magic into something she was never meant to be—magic that also affects the rest of her family by way of a terrible malady. Determined to make her a princess once and for all, a royal decree is issued: whosoever can tame the wild princess shall marry her and become king.

The Thief's Daughter by Tess Amram—When a thief steals from B's garden, taking a handful of roses and vanishing into the night, she doesn't think much of it. Petty vandalism is par for the course when your entire town hates you. What she doesn't expect is for the thief's daughter to show up on her doorstep, ready to pay a debt B never asked for...

Dance Away by K.M. Penemue—Queen Saffron arrives in the kingdom of Vosetis for Princess Kimberline's birthday, but there's no celebration in the air. Kimberline has fallen into a deep sleep and nothing can wake her. Even stranger, her elder sister and Saffron's beloved, the Crown Princess Aderes, disappears every night and returns with ruined shoes...

In the Land of the Damned by Camillia Quinn—Once upon a time Aldo proved his worth by going into hell and bringing back three golden hairs from the Devil, only to find himself in a marriage both he and his queen despise. Desperate to regain his freedom, Aldo goes in search of his missing father-in-law—and right back to the Devil he's never forgotten.