Do you read a lot of diverse or own voices books? Why or why not?
I read widely; the only categories I completely avoid are true crime and chick lit. I do tend to read a fair number of works by LGBT authors, too, since many of the books I've edited fall into that category. I like to read diversely to learn new things and to see the world through different points of view. I don't actively seek to read only eclectic books, but I am open to them whenever I come across them.

Opening sentence:
Below her are the lights of the valley, like burning jewels on a dark tide.

From page 56:
Gulls circle; the wind brings her the Bay, the tang of iron, the smoke of the fires in the cities to the east. 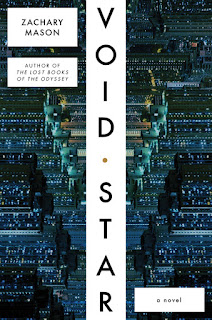 Not far in the future the seas have risen and the central latitudes are emptying, but it’s still a good time to be rich in San Francisco, where weapons drones patrol the skies to keep out the multitudinous poor. Irina isn’t rich, not quite, but she does have an artificial memory that gives her perfect recall and lets her act as a medium between her various employers and their AIs, which are complex to the point of opacity. It’s a good gig, paying enough for the annual visits to the Mayo Clinic that keep her from aging.

Kern has no such access; he’s one of the many refugees in the sprawling drone-built favelas on the city’s periphery, where he lives like a monk, training relentlessly in martial arts, scraping by as a thief and an enforcer. Thales is from a different world entirely—the mathematically inclined scion of a Brazilian political clan, he’s fled to L.A. after the attack that left him crippled and his father dead.

A ragged stranger accosts Thales and demands to know how much he can remember. Kern flees for his life after robbing the wrong mark. Irina finds a secret in the reflection of a laptop’s screen in her employer’s eyeglasses. None are safe as they’re pushed together by subtle forces that stay just out of sight.

My thoughts so far....
I'm about halfway through this book and still making up my mind as to what I think of it. I don't dislike it, per se, but the characters really don't grip me. I'll make a final assessment when I get to the end and put up my review in a few days' time.