Book Promo: Nature of the Beast by Aimee Brissay (LGBT/Paranormal) 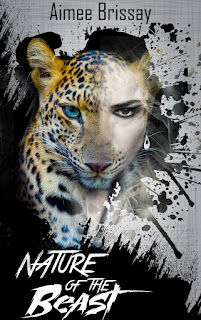 One mistake is all it takes for all hell to break loose.
After sorceress Alexandra tries to kill her insane father, her fae uncle expels her from the Otherworld to keep her safe. Living among humans, she wants nothing more than to leave her past behind. But working for the vampires and the werewolves doesn’t shield her for long.

When she saves a hurt werewold pup, Alexandra inadvertendly breaks the bond tying him with the pack and becomes his new alpha. This unhear-of shift exposes her to all kind of dangers, but it’s the least of Alexandra’s worries.

Back in the Otherworld, her father has not forgotten her and dispatches an assassin to kill her. But just who is this mysterious foe, and what will their arrival mean not only to Alexandra but to the delicate balance of the world?

Excerpt
“Settle down, little one. No one is going to hurt you here.”
His gaze darted to the hallway Chris had disappeared down, and he let out a low rumble.
I smiled and answered his silent question. “Not even him. He will come around.” After he’d got over having a werewolf in the house and came to terms with the idea that werewolves were real, that was.
“Trust me. Now settle down.” Though keeping my tone calm, I put as much force as I could muster behind the words.
I wasn’t a shifter, and the animal had no reason to obey me. But power was power, no matter where it came from, and I was praying it would be enough. Otherwise, I was screwed.
The wolf growled, shifting his center of gravity lower down his back as he prepared to jump.
I was familiar enough with werewolves to know they reacted to strength and dominance, so I tried again, putting more of that behind my words. “Enough!”
The growl subsided without dying completely, and the eyes holding mine became more alert, the anxiety in them half-replaced by curiosity.
“That’s it. Settle down.”
The wolf whimpered and crouched until his belly rested on the floor. He regarded me carefully, his upper lip still curled in a threat. He didn’t trust me. Not yet. The feeling was mutual.
I wasn’t his alpha, nor did I want to be, but I needed him calm and obedient. My heart, which beat loudly when I first faced the animal, had lowered to a more normal rhythm. Sweat soaked through my T-shirt, and I was willing to bet money the wolf could smell the fear on me. I held his gaze, bringing up even more power.
Calm down, damn it!
The wait stretched on; a nerve wrecking staring contest. I didn’t move, barely breathing. Slowly, the wolf’s body went slack, the lip uncurling. The pupils shrank back to normal size, for a wolf anyway, but some of the angst remained.
“That’s it. Good boy.”
One of his ears flicked, head tilting to the side.
“I need to check how bad you’re hurt.”
The wolf tried to crawl farther back, clearly not happy with my suggestion.
“No, I mean it. You’re hurt. I need to see what is going on.”
The growl was back in his throat.
“Enough!” I used power to put strength behind the command. “Shift!”
His eyes widened, but the force behind the words could not be ignored. He tried to fight me, I could see it on his face, but I kept my gaze and the stream of power steady, waiting for him to submit.
Eventually, the tension left his body and he stretched out on the floor. The pupils changed slightly, their color softening to a warm brown. The fur rippled as the muscles beneath rearranged themselves. The shoulders widened, the neck thickened, and the muzzle retracted. 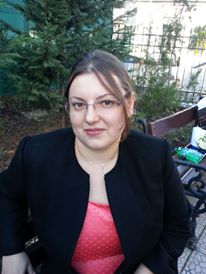 About the Author
Born in Romania, land of the Iele and Vlad the Impaler, AIMEE BRISSAY has spent all her life surrounded by stories. She has ridden side by side with d’Artagnan and The Three Musketeers to retrieve the Queen’s diamonds, set sail on the Erasmus in search of the Japans, fell in love with Rhett Butler and roamed the Wild West alongside Old Shatterhand. She has walked in the footsteps of the Olympian Gods and searched for Zalmoxis’ sanctuary in the Carpathians. In her mind, she’s never been the damsel in distress but rather the knight in shiny armor fighting for a cause. Aimee Brissay loves each and every one of these characters with a passion, and has always had a soft spot for the men-on-men fellows.

She can write anywhere, even in a crowded room or a busy subway station, but she loves solitude. When she’s not at her evil day job or she’s not torturing her characters in her latest WIP, she can be found writing or playing with her cats. Or her newly adopted dog, because 5 cats are just not enough.

She welcomes messages from readers and promises to answer all of them as soon as possible, though that can mean anything from one hour to a month.