If you could meet one author, dead or alive, who would it be?
Tough to pick just one, but I guess I would have to say Chelsea Quinn Yarbro. I love her Saint Germain historical vampire series and would enjoy chatting with her about how she chooses her period settings and conducts her research.

Opening sentence:
'Lor' love you, sir!' Fevvers sang out in a voice that clanged like dustbins lids.


From page 56:
'Oh, sir! can you think of a more innocent way of earning a living, than to sell good ice-cream at modest prices to little children, after so many years of selling tricks to dirty old men.' 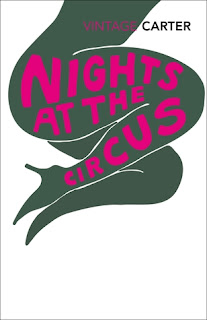 My Current Read
Nights at the Circus by Angela Carter

Courted by the Prince of Wales and painted by Toulouse-Lautrec, she is an aerialiste extraordinaire and star of Colonel Kearney's circus. She is also part woman, part swan. Jack Walser, an American journalist, is on a quest to discover the truth behind her identity. Dazzled by his love for her, and desperate for the scoop of a lifetime, Walser has no choice but to join the circus on its magical tour through turn-of-the-nineteenth-century London, St Petersburg and Siberia.