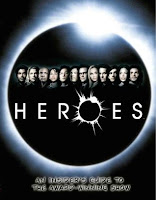 Heroes is the fan-favourite and critically acclaimed hit epic drama that chronicles the lives of ordinary people who discover they possess extraordinary abilities. Following a total eclipse, the special powers of a multitude of seemingly ordinary people are gradually revealed. While struggling to come to terms with their powers, alliances must be forged and sacrifices made if the emerging heroes are to fulfil their ultimate destiny - and save the world. This companion features the best of Heroes: The Official Magazine, collecting exclusive interviews with the cast and crew, revealing behind the scenes secrets and providing sneak previews in one bumper feast of heroics! (Synopsis)


As a huge new Heroes fan, I couldn't resist this book. I am giving it five stars thanks to its awesome interviews and images. The only slight letdown is the fact that it released after season two, so some of its statements regarding character motivation etc. are 'incorrect', given that things changed during seasons three and four. But, taken simply as a memento from a great series, it's an important addition to the library of any Heroes fanatic.