Name a book that changed your life.
Les Miserables by Victor Hugo. I read it at thirteen, after seeing the musical in London, and it sparked a love of the classics that saw me reading nothing but eighteenth and nineteenth century literature for a good three years.

Opening sentence:
When he asked her to be his wife, clumsily, and with agonizing effort, she was uncharacteristically silent.

From page 56:
Chava was clever and could not stave her appetite for reading, for any kernel of information she could collect from a world beyond their own. 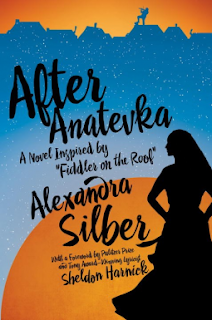 A sweeping historical novel in the grand tradition of Russian literature that imagines what happens to the characters of Fiddler on the Roof after the curtain falls.

The world knows well the tale of Tevye, the beloved Jewish dairyman from the shtetl Anatevka of Tsarist Russia. In stories originally written by Sholem Aleichem and then made world-famous in the celebrated musical Fiddler on the Roof, Tevye, his wife Golde, and their five daughters dealt with the outside influences that were encroaching upon their humble lives. But what happened to those remarkable characters after the curtain fell?

In After Anatevka, Alexandra Silber picks up where Fiddler left off. Second-eldest daughter Hodel takes center stage as she attempts to join her Socialist-leaning fiancé Perchik to the outer reaches of a Siberian work camp. But before Hodel and Perchik can finally be together, they both face extraordinary hurdles and adversaries—both personal and political—attempting to keep them apart at all costs. A love story set against a backdrop of some of the greatest violence in European history, After Anatevaka is a stunning conclusion to a tale that has gripped audiences around the globe for decades.