Do you read tie-in novels to movies or television series?
For this question, I am going to assume that it only means novels written specifically for the film/TV series and not movie tie-in editions of previously published books. To that end, I would say that I do so on occasion. If I particularly loved a film or TV show that might prompt me to purchase related books. Off the top of my head, ones that I have read include Crimson Peak, Van Helsing, and the Heroes and Heroes: Reborn novel/novellas. A little different, but I will also often buy 'making-of' books, especially for films such as Lord of the Rings. Some tie-in books I don't yet have but would like to read are the three short novels relating to The Originals--if only because I love Elijah Mikaelson so much! *wink*

Opening sentence:
There are many good reasons for visiting Lyme Regis.


From page 56:
For country-house visitors the pursuit of culture is a less powerful motive than basic human curiosity. 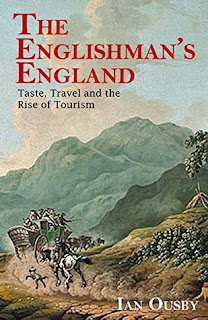 In this fascinating and original study Ian Ousby investigates the landmarks chosen by the English for their leisure travel over the centuries. He looks in particular at four types of attraction still prominent on the tourist map of England: literary shrines, country houses, picturesque ruins and the natural landscape. All these first became objects of fashionable attention during the eighteenth century, when improvements in transport combined with a spirit of practical inquiry to breed the first generation of travellers who called themselves ‘tourists’.

Drawing on a wide range of sources - journals, travel books and guidebooks, novels and poems, as well as many engravings – Ian Ousby traces the canons of taste which led the early tourists to seek out places like Stratford-upon-Avon, Chatsworth, Tintern Abbey and the Lake District, and records the stages by which these places acquired the trappings of the tourist attraction. Above all, he shows the development not just of an industry but of a state of mind marked, from its earliest phase, by the underlying fear that tourism is fated to spoil or even destroy the very thing it most admires.