When you enter an unfamiliar house or apartment for the first time, do you feel disappointed if you don't see any bookshelves, or books on the coffee table?
Absolutely. What's a home without books? Plus, I must confess to doing a certain amount of character assessment, particularly regarding new acquaintances, based on their bookshelves and/or reading habits. That's probably bad, but I can't help it. :)

Opening sentence:
It's agony and relief to watch my life end.


From page 56:
I lose my sense of direction as we turn corners and cross through checkpoints where all our monikers are scanned and we're questioned. 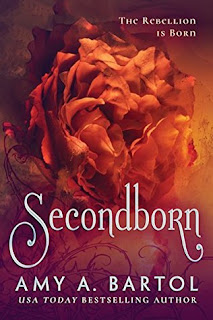 Firstborns rule society. Secondborns are the property of the government. Thirdborns are not tolerated. Long live the Fates Republic.

On Transition Day, the second child in every family is taken by the government and forced into servitude. Roselle St. Sismode’s eighteenth birthday arrives with harsh realizations: she’s to become a soldier for the Fate of Swords military arm of the Republic during the bloodiest rebellion in history, and her elite firstborn mother is happy to see her go.

Televised since her early childhood, Roselle’s privileged upbringing has earned her the resentment of her secondborn peers. Now her decision to spare an enemy on the battlefield marks her as a traitor to the state.

But Roselle finds an ally—and more—in fellow secondborn conscript Hawthorne Trugrave. As the consequences of her actions ripple throughout the Fates Republic, can Roselle create a destiny of her own? Or will her Fate override everything she fights for—even love?