Today I welcome Layla Dorine to the blog to answer a few questions for Interview³.

1) Tell us 3 fun facts about your writing history
I love telling stories, that’s why I write, that’s why I started writing when I was young and it’s why I keep on writing now. Most of my debut novel was written as part of a roleplay game. I’ve been part of several anthologies and almost all of my anthology stories have been written on buses or trains.

2) Describe your writing style in 3 words
Angsty, gut-wrenching, and complex

4) Share your 3 favourite books
An American Night, by Jim Morrison, it’s a book of poetry by Morrison, something I can across in high school that I quickly fell in love with and have cherished for the past 24 years.
The Outsiders, by S. E. Hinton, the book that inspired me to try my hand at writing, it’s a story I’ve read so often, I’ve worn out several copies of the book. I always loved the story of how the brothers and their friends interacted and how their world and that of the kids from across the tracks clashed.
The Lord of the Rings trilogy. The lushness of Tolkien’s world and the adventures that take place never get old.

5) What are your 3 essential writing tools?
A notebook, preferably hard bound, pens, and a camera for taking pictures of photo references for the story. Sometimes it’s a car, or a particular house, a restaurant, a horse, I snap shots of things that catch my attention and give me a visual to work from as I’m writing.

6) Where are your 3 favourite places to write?
1. By the ocean or any moving body of water where I can listen to the water flowing over rocks or crashing against the shore and take a break to play in the water if the mood hits.
2. In the forest, seated anywhere that is devoid of people. I love being able to listen to nature while I work and having the kind of isolation that doesn’t leave me very many ways of getting distracted.
3. While traveling on a bus or train, being able to look out the window and watch the countryside go past. I tend to keep my ear buds in and lose myself in the worlds I’m creating without having to pay attention to traffic or where I’m going.

7) Name 3 items on your writing wish list
1. I’d love to take part in one of the Dreamspinner anthologies. I know that would mean actually checking out the call for submissions and writing something, which I’ve never tried but do plan to do one day.
2. I’d like to write a story focused around some sort of a haunting, horror was the first genre I really dove into with my writing, but it was only poetry and some shorts, I would love to see if I couldn’t pull off a full length novel in the horror genre.
3. I’ve always loved wolf shifters and while I’ve written about them in roleplay worlds and for fun pieces with friends, I’ve never written a full length novel featuring them despite having outlined a few. I am hopeful that I will remedy this particular wish come fall and start working on one that’s been tumbling around in my head all summer.

8) What are your top 3 tips for aspiring writers?
1. Never let anyone tell you that you aren’t good enough, that you can’t do it or that it would be a waste of your time to try.
2. Tell the story that you want to tell, not that someone else feels you should be telling. Stay true to the characters and what they show you they are all about and write for them, as well as for yourself.
3. Have a thick skin, learn to see the places where you can improve, even when they are pointed out to you in the harshest of reviews and speaking of reviews, understand that some people will be mean-spirited, vicious, and downright cruel in their delivery. Don’t take it personally, don’t engage them or fire back, just hold your head up high and be proud of the fact that you succeeded in having a book published, and work from there to constantly improve.

9) Tell us 3 of your writing plans for the year ahead
1. I have a partially written MM romance featuring a gender fluid character and one who is Pansexual that I’m looking to finish before the end of the year. Gypsy’s Rogue started off as roleplay pieces, but the more I read them, the more of Gypsy’s story I finally began to get, until now, at 16 chapters in, I’m building towards their HEA.
2. For the past few months I’ve been working on an MM romance featuring an escort and the lonely businessman who he accompanies to the winter gala. Takashi works too hard and has never considered anything like using an escort service before, but faced with another dateless event, he does so, and meets someone he’d truly like to get to know. Thus more calls, more dates, and a chance at something special.
3. For the past few years I’ve been working on a bodyguard/rocker story that is sitting at somewhere around 50,000 words. I would like to finish that one by December and get it off to Betas so I can cross it off my works in progress list.

10) Tell us about your latest release
Burning Luck is my first MMM biker romance, and the first in what is set to be a series of biker themed romances. It is also my first time delving into full on BDSM within the context of a storyline. It’s a difficult thing, adding someone new to an established relationship and Thorn and Cain have their work cut out for them convincing Lucky to trust them and open up. Of course, if Thorn wasn’t so stubborn things might go a lot easier, but is stubbornness and what he nearly costs them all, is a chance for him to learn and that learning carries not only through the ending of Burning Luck, but into the next book as well.
In writing these stories, I try to show guys who maybe walked on the wrong side of the law once, but have now gone legitimate. They have businesses and responsibilities that they take very seriously and they are not getting themselves involved in some of the things 1%ers are noted for. A twisting, turning ride, Burning Luck is as much about finding forgiveness as it is about learning from ones’ mistakes. 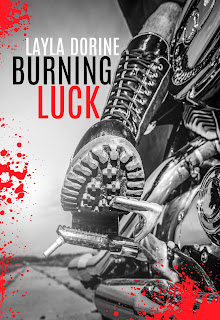 Lucky Strike McAllister isn't very lucky. In fact, he isn't much of anything most days, to hear his MC tell it. Since the death of his father from cancer and the suicide of his pops, he's done nothing but find ways to get into trouble. He's talented with an airbrush gun and an amazing artist when he sets his mind to it, but more often than not, the things Lucky sets his mind to are pretty self-destructive.

When Thorn and his partner Cain, members of the neighbouring chapter of the Rollin' Jokers, are forced to fish Lucky out of the ocean on a chilly fall night, both men decide he needs a keeper and who better than them to keep Lucky from destroying himself. Too bad Lucky can't see that they're trying to help. Bitter and lashing out, he does everything he can to sabotage the home and relationship they're offering.

With secrets mounting and trouble knocking on their doorstep, Lucky struggles to find a way to put aside his anger long enough to get to know the two men who have taken such an intense interest in him. As tensions mount, will he look to take the easy path and he run from them, his club and everything he's ever known, burning bridges and the last of his luck in the process or will he stay and learn that there are better ways to burn? 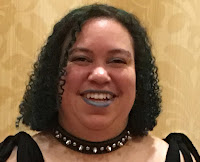 About the Author
Layla Dorine lives among the sprawling prairies of Midwestern America, in a house with more cats than people. She loves hiking, fishing, swimming, martial arts, camping out, photography, cooking, and dabbling with several artistic mediums. In addition, she loves to travel and visit museums, historic, and haunted places.

Layla got hooked on writing as a child, starting with poetry and then branching out, and she hasn’t stopped writing since. Hard times, troubled times, the lives of her characters are never easy, but then what life is? The story is in the struggle, the journey, the triumphs and the falls. She writes about artists, musicians, loners, drifters, dreamers, hippies, bikers, truckers, hunters and all the other folks that she’s met and fallen in love with over the years. Sometimes she writes urban romance and sometimes its aliens crash landing near a roadside bar. When she isn’t writing, or wandering somewhere outdoors, she can often be found curled up with a good book and a kitty on her lap.