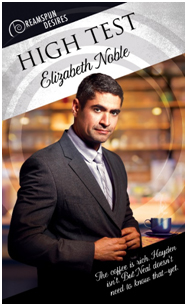 Hayden Owens is just your typical graduate student working his way through school as a barista for the Owens Coffee Company—no relation. But he keeps the “no relation” part to himself when he meets dashing, older Neal Kirchner, a successful architect from an old-money family. Hayden doesn’t exactly lie, but he figures it can’t hurt for Neal to believe he’s a rich kid. After all, Hayden doesn’t want Neal thinking he’s a gold digger.

The closer they become, the harder it gets for Hayden to come clean. Something always seems to get in the way. When a company bankruptcy and a jilted, vindictive woman threaten to expose his charade, Hayden thinks it’s all gone down the drain. Luckily Neal is ready with some innocent trickery of his own.

Neal might have been a good twenty years older than Hayden, but he was muscular under his expensive, tailored suit. The scent of Neal’s cologne swirled around in Hayden’s head and mingled with the music. The combination conspired to lower Hayden’s defenses. He leaned more heavily against the warmth of Neal’s body and appreciated the strong arms around him.
Their hands moved slowly over each other, touching and caressing. Hayden pressed closer as Neal’s hand roamed over his shoulders, down his spine, and over the curve of his ass. They swayed together to the music and kept on even when the music changed.
The lights were being turned off when Neal took Hayden’s face in both hands and kissed him. At first it was chaste and sweet. Neal’s lips were just the right combination of firm and soft, and he tasted of martinis.
Hayden decided he really liked martinis.

About the Author
Mystery, action, chills, and thrills spiced with romance and desire. ELIZABETH NOBLE started telling stories before she actually knew how to write, and her family was very happy when she learned to put words on a page. Those words turned into books and fan fiction that turned into a genuine love of M/M romance fiction. Being able to share her works with Dreamspinner is really a dream come true. She has a real love for a good mystery complete with murder and twisty plots as well as all things sci-fi, futuristic, and supernatural and a bit of an unnatural interest in a super-volcano in Wyoming.
Elizabeth has three grown children, two grandchildren, and is now happily owned by an adorable mixed-breed canine princess and her sidekick tabby cat. Elizabeth lives in her native northeast Ohio, the perfect place for gardening and winter and summer sports (go Tribe and Cavs!) and stargazing all year long. When she’s not writing, she’s working as a veterinary nurse, so don’t be surprised to see her men with a pet or three who are a very big part of their lives.
Elizabeth has received a number of amateur writing awards. Since being published, several of her novels have received Honorable Mentions in the Rainbow Awards. Jewel Cave was a runner-up in the Gay Mystery/Thriller category in the 2015 Rainbow Awards. Ringed Love was a winner in the Gay Fantasy Romance category of the 2016 Rainbow Awards.