Both Bram Stoker's Dracula and Mary Shelley's Frankenstein are considered classics. Have you ever read either of them?
Of course! :) I've read them multiple times. Both are great, but I like Frankenstein best. Perhaps that's because it was a university set book, though, so we spent a lot of time with it.

Opening sentence:
Moscow, just past midwinter, and the haze of ten thousand fires rose to meet a smothering sky.

From page 56:
Olga lifted her head, startled. The priest's blue eyes were expressionless--she thought she had imagined the venom in his voice. 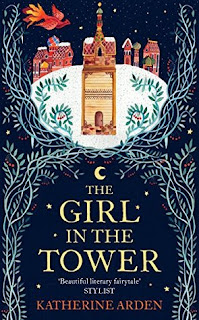 My Current Read
The Girl in the Tower
Katherine Arden

For a young woman in medieval Russia, the choices are stark: marriage or a life in a convent. Vasya will choose a third way: magic...

The court of the Grand Prince of Moscow is plagued by power struggles and rumours of unrest. Meanwhile bandits roam the countryside, burning the villages and kidnapping its daughters. Setting out to defeat the raiders, the Prince and his trusted companion come across a young man riding a magnificent horse.

Only Sasha, a priest with a warrior's training, recognises this 'boy' as his younger sister, thought to be dead or a witch by her village. But when Vasya proves herself in battle, riding with remarkable skill and inexplicable power, Sasha realises he must keep her secret as she may be the only way to save the city from threats both human and fantastical...