Today I welcome Jackie Keswick to the blog to share her new release, Undercover Star! 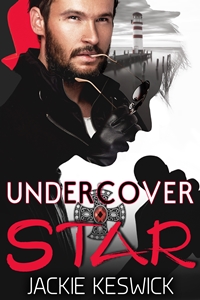 It sounds like the stupidest idea in the history of stupid ideas. Detective Inspector Josh Ingram wants to find a deadly medieval locket and through it, a murderer. So why does his boss decide to team him up with Matisse Vervein, a pop idol many consider just a pretty face... and expect the two of them to hunt down an art thief?

Marissa Godwin, Matisse's no-nonsense manager, isn't stupid. Neither is her brother-in-law, Detective Superintendent Tim Montgomery. Each is looking out for a lonely man on the verge of quitting what he does best, and both believe that their charges would make a great team.

The attraction sizzling between Josh and Matisse is hard to miss, but there's plenty of resentment, too. Focussed on pushing Josh and Matisse towards each other, Marissa and Tim haven't imagined the kind of trouble a music star and a detective can find when they ditch their prejudices and accept that the attraction between them is mutual. Or how far each is prepared to go to prove it to the other.

A standalone, feel-good romance set in England and Scotland, featuring a reluctant pop star who's not out, a detective trying his hand at being a bodyguard,  plenty of adventure, and a happy ending.

Excerpt
"Are you insane?" Matisse Vervein stared at the man on the other side of the desk, convinced he couldn't have heard what he thought he had.
His day had begun normally enough until a cop had pulled him over right outside New Scotland Yard and told him he'd been speeding. Matisse had no idea whether that was true or not. He'd been too engrossed listening to the track coming from the Land Rover's  sound system to watch the numbers on the dashboard. Never having had a speeding ticket before, Matisse had expected to get away with a slap on the wrist. Instead, the officer had asked him to step out of his car and follow.
He'd been led deep into the famous building, until he ended up in a small, tidy office, where a middle-aged man in a suit introduced himself as Detective Superintendent Timothy Montgomery and offered him a seat.
Montgomery had a friendly smile, and the twinkle in his deep blue eyes could pass for reassuring. He'd confirmed Matisse's identity, but made no mention of speeding fines. Instead, he'd opened his mouth and—
"Did you just ask me to go undercover?" Matisse's voice rose to something close to a screech, but he didn't care. He was a singer, a pop star with a fanbase of millions. He had minders, assistants, stylists, and personal shoppers. He didn't… didn't….
"I did ask you that, yes." Montgomery didn't bat an eyelash at his outrage. "Though I didn't quite mean it the way you heard it. We're hunting an art thief who snatches jewellery, often during promotional events or fundraisers. You're a star. You're at home in the environment our thief operates in and you're known to support the arts. Nobody will question your presence at a charity gala. And we could use your help."
"You are insane." Matisse didn't care that he was insulting a senior police officer. The very idea was ludicrous. "I know nothing about police work. I know nothing about how thieves work. I—"
"We wouldn't send you to do this alone," Montgomery placated. "That's not how we work. Why don't you let me introduce you to your… partner?"

About the Author
Jackie Keswick was born behind the Iron Curtain with itchy feet, a bent for rocks and a recurring dream of stepping off a bus in the middle of nowhere to go home. She's worked in a hospital and as the only girl with 52 men on an oil rig, spent a winter in Moscow and a summer in Iceland and finally settled in the country of her dreams with her dream team: a husband, a cat, a tandem, a hammer and a laptop.

Jackie loves unexpected reunions and second chances, and men who don't follow the rules when those rules are stupid. She blogs about English history and food, has a thing for green eyes, and is a great believer in making up soundtracks for everything, including her characters and the cat.

And she still hasn't found the place where the bus stops.

For questions and comments, not restricted to green eyes, bus stops or recipes for traditional English food, you can find Jackie Keswick in all the usual places: