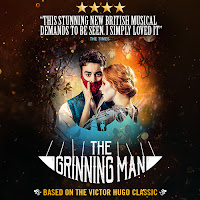 It's hard to know where to start when reviewing The Grinning Man, except to say, "Wow!" It is the best new musical I've seen in a while. Everything about it works, from the music to the set to the costumes and, of course, the puppetry, which flows so naturally with the rest of the action.


This is a show that brings tears to your eyes one moment and laughter to your lips in the next. It has a macabre, grotesque feel that reminds me of Shockheaded Peter. Although I've read a lot of Hugo's works, I've yet to get to L'Homme Qui Rit, but after leaving the theatre, I found myself obsessed with plans to read the book in both French and English and to check out the graphic novel and a few of the film versions--the story gripped me that much.

As for the musical itself, I really wish I had the opportunity to see it again, as I think it is a show that would offer something new each viewing. It only has a short run, but I will cross my fingers for at least a CD recording; the music certainly warrants it, and the cast deserve to have their excellent performances captured for posterity. This is a show that will stay with me for a long, long time, and if you are in London, I highly recommend paying a visit. I believe it runs until mid February. 5 stars from me. I would give it six if I could.