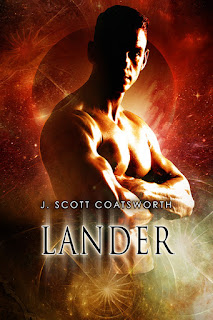 In the sequel to the Rainbow-Award-winning Skythane, Xander and Jameson thought they’d fulfilled their destiny when they brought the worlds of Oberon and Titania back together, but their short-lived moment of triumph is over.

Reunification has thrown the world into chaos. A great storm ravaged Xander's kingdom of Gaelan, leaving the winged skythane people struggling to survive. Their old enemy, Obercorp, is biding its time, waiting to strike. And to the north, a dangerous new adversary gathers strength, while an unexpected ally awaits them.

In the midst of it all, Xander’s ex Alix returns, and Xander and Jameson discover that their love for each other may have been drug-induced.

Are they truly destined for each other, or is what they feel concocted? And can they face an even greater challenge when their world needs them most?

Xander is a skythane man whose wings have always been a liability on the lander-dominated half world of Oberon.

Jameson is a lander who has been sent to Oberon to find out why the supply of the psycho-amoratic drug pith has dropped off.

What neither knows is that they have a shared destiny that will change the two of them - and all of Oberon - forever.

Jameson savored the kiss, his arms around Xander, the way they fit together just right. They were finally together, and Titania and Oberon were one again.
Erro, Quince had called this new world. Like the skythane god of the sun, the one Errian and the Erriani were named for.
For the moment, everything was right in his life, and he never wanted it to end.
A cold drop of water on his cheek brought him out of his reverie. He glanced up. Storm clouds were piled high, swiftly overtaking them. Rain began to pour out of the sky like a waterfall, and thunder echoed in the clouds as the valley went dark, sunlight smothered by the onrushing clouds. Nearby trees thrashed about in the wind, their purple leaves fluttering in distress.
“What the hell?” Xander said as the winds picked up and ruffled the feathers of his wings. He stared up at the black tempest.
“The Split!” Jameson shouted over the howling of the wind. He mimed the two halves of the world, each with their own atmosphere, suddenly being forced together in the middle. “When the Oberon half shifted, all the atmosphere it brought with it along the Split was forced up here!”
A bolt of lightning struck a nearby tree, crisping it to ashes and standing Jameson’s hair on end.
“Run!” Xander shouted.
Jameson’s vision swam, and a memory slipped into his conscious mind from that other part of him—a high-ceilinged cavern that was more like a faery palace than a cave—where he’d stolen away with a lover. More than once.
His stomach heaved at the displacement, and he clenched his hands. That wasn’t me. They were someone else’s memories.
“Follow me!” he shouted at his four companions—Xander, Quince, Kadin, and Venin—and ran toward the cliffs that were rapidly fading to invisibility behind the rain. He pushed down the memory-nausea, tasting bile in the back of his mouth.
Alia was missing. He’d last seen her as they had fled the Mountain, when it had begun to collapse. Jameson looked around wildly, but she was nowhere to be seen. “Where’s Alia?” he shouted at Kadin as they ran. Thunder shook the valley.
Kadin shook his head, mouthing, “I don’t know.”
Rain swirled all around them, coming down so fast that it pooled on the ground and ran in rivulets downhill toward the lake that was now half filled with the broken remains of the Mountain.
The mud made the footing treacherous. Jameson clambered up the hill, using roots and rocks that offered a firmer surface than the naked ground. The wind tugged at his wings, threatening to flip him over. He pulled them in tightly and glanced back to be sure the others were following him through the tempest.
Jameson reached the cover of the forest, plunging under the protection of the canopy. The trees here were tall and thin with white bark trunks and broad purple leaves that were being shredded by the storm.


Scott is giving away a $25 Amazon gift certificate and three copies of his queer sci fi eBook The Stark Divide. 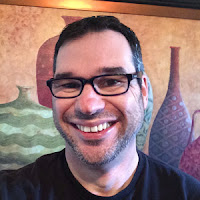 Scott lives between the here and now and the what could be. Indoctrinated into fantasy and sci fi by his mother at the tender age of nine, he devoured her library. But as he grew up, he wondered where the people like him were.

He decided it was time to create the kinds of stories he couldn’t find at Waldenbooks. If there weren’t gay characters in his favorite genres, he would remake them to his own ends.

His friends say Scott’s brain works a little differently – he sees relationships between things that others miss, and gets more done in a day than most folks manage in a week. He seeks to transform traditional sci fi, fantasy, and contemporary worlds into something unexpected.

He runs Queer Sci Fi and QueeRomance Ink with his husband Mark, sites that bring queer people together to promote and celebrate fiction that reflects their own reality.