Do you use a mouse pad? If so, what's on it?
Funny story.... I needed a new mouse pad, but when I went to the shops, I was in a rush. I saw one that began "I may appear brilliant and intelligent", thought that would do, and bought it. It was only when I got home that I realised the end said "I'm probably just drawing cartoon penises". Haha! Still, it's a talking point if anyone comes into my study and sees it.

Opening sentence:
There is just one hymn left to practise.


From page 56:
The king gathered his cape around him and walked off, young Alex and Jonathan running to catch up. 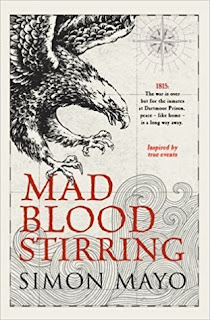 On the eve of the year 1815, the American sailors of the Eagle finally arrive at Dartmoor prison; bedraggled, exhausted but burning with hope. They’ve only had one thing to sustain them – a snatched whisper overheard along the way.

The war is over.

Joe Hill thought he’d left the war outside these walls but it’s quickly clear that there’s a different type of fight to be had within. The seven prison blocks surrounding him have been segregated; six white and one black. As his voice rings out across the courtyard, announcing the peace, the redcoat guards bristle and the inmates stir. The powder keg was already fixed to blow and Joe has just lit the fuse.

Elizabeth Shortland, wife of the Governor looks down at the swirling crowd from the window of her own personal prison. The peace means the end is near, that she needn’t be here for ever. But suddenly, she cannot bear the thought of leaving.

Inspired by a true story, Mad Blood tells of a few frantic months in the suffocating atmosphere of a prison awaiting liberation. It is a story of hope and freedom, of loss and suffering. It is a story about how sometimes, in our darkest hour, it can be the most unlikely of things that see us through.