Today I welcome Alina Popescu to the blog to share her new MM tale Gaming and IRL Boss Fights. 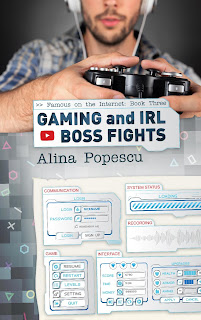 An internet famous geek. A sexy landlord who hates him. An unlikely duo with slim chances of beating the romance game.

Simon Cromfield’s life seems perfect from the outside. His gaming channels made him an internet celebrity, he has great friends, and he’s just moved into a luxurious apartment. Yet his gorgeous landlord did a one-eighty turn and decided he hates Simon, his family thinks he’s a total failure, and some of his fans act like they own him.

Branden Dahlman has enough on his plate. He doesn’t need that pest, Simon, who became the bane of Branden’s existence on top of a large estate he never wanted and a family that drives him insane. As he unleashes his resentment on Simon, the sexy bastard insists on proving Branden wrong about everything.

In an unlikely turn of events, when Simon hits his lowest, Branden is there to support him. But will this new-found thing between them last when the pressures of Simon’s world come crashing in?

Gaming and IRL Boss Fights is the third book in the contemporary gay romance series Famous on the Internet. If you like geeks, binge-watching online content, and enemies-to-lovers tropes, then you will love Alina Popescu’s online celebrity protagonists.

Buy your copy of Gaming and IRL Boss Fights today to join the game.

I was a late bloomer in the videogame world. I only started playing heavily in my late teens, when I was almost an adult. That said, I’ve been part of this world, lurking on the fringes, for a very long time. I’ve met a lot of skilled gamers, I watch gaming YouTube channels, and I tend to keep an eye on the industry. My passion for this world of telling stories through gameplay lead to the book I’ve just released, Gaming and IRL Boss Fights.

The biggest inspiration for the character I’ve created as a protagonist, Simon, comes from my boyfriend. To that, I added a touch of YouTube celebrity from gamers I follow. Most of the games I’ve mentioned are either games I played, or games I watched Mike play. Mike’s skills are worlds above mine, so they were clearly a better match for my character’s.

I am used to gaming conversations going on around me. At one point, while working in an IT company, I could carry out a lengthy, detailed conversation on World of Warcraft without ever having played it once. Things haven’t changed much, as games are an important topic of conversation in the groups I run with it. While I know of a lot of games, I haven’t played that many. So I used Mike’s knowledge for inspiration.

Mike warned people might not get all the gaming names and references I made. Not even serious gamers, as some of his favorites are seriously old school. I am fine with that, as we shouldn’t completely forget games of the past. Some of them have amazing, compelling storylines. And for someone like me, who built a career on storytelling, these predecessors are important.

Some of the jokes Simon makes are also inspired by my boyfriend. A lot of those that reference the Witcher are almost direct quotes from him. I remember watching him play (the world of Witcher fascinated me but I did not have time to play it myself), and him showing me how Geralt could not climb down a few stairs like a normal person. We spent a full ten minutes on that alone, and I was in tears from all the laughing.

Another important source inspiration is the work that goes behind a YouTube channel. I do have my own, although it’s kind of small and still fresh, but that’s enough to realize just how much work goes into maintaining one. I can extrapolate and multiply my effort to understand what goes behind a famous, popular YouTuber. Thankfully, they also talk about it, so I had my suspicions confirmed. I thought, with more and more of us using YouTube as entertainment and a research tool, it would make sense to explore the hard work that goes behind it.

Being a full-time YouTuber is rarely well-received or easily accepted as “rea” job. Most people don’t understand how making videos and posting them online can be a lucrative full-time job. As an author, I can relate. I am sure many other writers can just as easily. How many times have you been told something in the lines of, “Oh, you’re a writer? I’ve been meaning to write my own book for a long time. Maybe I should start. If you can do it, I can.” So while the life of a YouTuber inspired me for this book, my own experiences as an author helped quite a bit.

I had a blast entwining all these sources of information and inspiration to create the story that now is Gaming and IRL Boss Fights. I hope my love for games, my admiration for gamers, and my ideas about what makes a real job come across in an entertaining way. If you’re a gamer and I got anything wrong, and by wrong I mean not mentioning a game you love, I apologize. I am sure the game you have in mind is great, so why not tell me about it? My knowledge of games is ever-expanding, so I might just include it in a future book.

The Famous on the Internet Series

Tristan’s love life has one simple rule: his brother, Trevor, is off limits.

To fight his relentless love for Trevor, Tristan left for college at sixteen. A new city, building a new life for himself, and making new friends weren’t enough to give up what he considers sick, twisted feelings. Tristan even started an anonymous blog to cope with his love for his older brother. It made him famous on the Internet, but it wasn’t enough to get over his obsession.

Every time he goes home, a quick glance at Trevor brings it all flooding back.

When commitment-phobe Trevor introduces his serious boyfriend on one of Tristan’s rare visits home, things get a whole lot more complicated for the adoring kid brother. How far can Tristan run this time before he runs out of places to hide from his feelings?

Disclaimer: the main characters in the story are not blood relatives, the two boys were only raised as siblings. 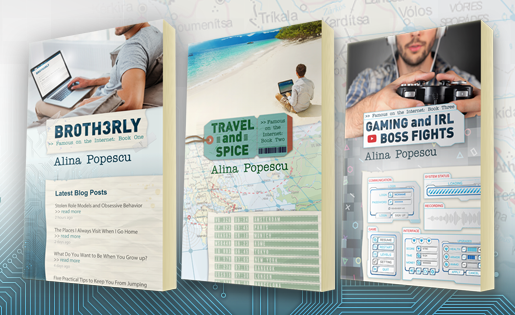 Famous travel blogger returns home to have his life thrown off balance by his high school crush.

Dante Sandford is at the top of his game. He’s paid to travel the world and share his spicy stories on his blog. He’s still young, gorgeous, and confident. When Dante’s high school reunion knocks on his door, he’s reminded of everything he’s lacking. More so when his old crush, Tommy Clancy, makes a pass at him. Or when the hot romance blows in Dante’s face because of his lifestyle.

Tommy has always been the hottest man in Riverbrook. Possibly the world. He’s stunning, smart, and the kindest soul Dante has ever known. He’s also read Dante’s blog along with all his steamy encounters. No wonder Tommy doesn’t trust Dante for anything more than a casual hookup.

Dante returns to hometown Riverbrook to face his past of bullying and feeling like a misfit. He instead ends up dealing with the reality of being a travel blogger: relationships are close to impossible. That won’t stop Dante from trying to convince Tommy his short-lived flings are not by design. 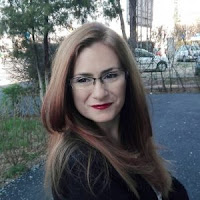 About the Author
Alina Popescu is an author, traveler, and coffee addict. She has published several paranormal, science fiction, urban fantasy, and contemporary series, many of them having reached the Amazon bestseller lists for their genres. Her stories often fall under the LGBTQ fiction and romance subgenres.

Born and raised in Romania, Alina has been writing for most of her life. She’s an avid consumer of stories in all their forms. She’s fascinated by myths, folk tales, and other creators’ visions of the future. She finds her inspiration in books of all genres, movies, and the occasional TV shows or anime binges.

Alina is a proud geek and needs her fast internet connection and assortment of gadgets more than she needs air.

For a free taste of her writing, visit her website, subscribe to her newsletter and get a free copy of her military gay romance, Mission: Protect the Ex.