Is there a fictitious town in a book that you would love to live in? What makes it appealing?

I can't, off the top of my head, think of a fictitious town I love, but I've always been drawn to the idea of living in Tolkien's Rohan with its Anglo-Saxon-inspired culture. I'd be a shield maiden, ride horses, and stand outside mountain-top halls with the wind dramatically sweeping my hair to the side. Da da daa daa dum daa da dum.

Opening sentence:
The frost bit at my lips and stung my eyes as I vaulted onto the back of my horse Kati, heart pounding hard with the mixed fear and blood-lust that was my inheritance, and my duty as queen.


From page 56:
"You see, Hermes is such a trickster that he fully anticipated I wouldn't believe him and, on the off-chance that I did, I imagine he thought it would be a good laugh to set me after Calliope." 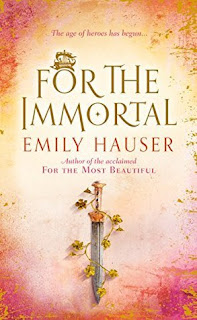 My Current Read
For the Immortal
Emily Hauser

Thousands of years ago, in an ancient world where the gods control all and heroes fight to have their names remembered down the ages, two extraordinary women become entangled in one of the greatest heroic tales of all time . . . and must face how much they are willing to risk for immortality.

Desperate to save her dying brother, Admete persuades her father, the king of Tiryns, to let her join Hercules on one of his legendary twelve labours. Travelling to the renowned female warrior Amazons in search of a cure, Admete soon discovers that both Hercules and the fearsome Amazons are not as they first seemed.

The Amazons greet the arrival of the Greeks with mixed feelings – and none more so than Hippolyta, the revered queen of the tribe. For Hercules and his band of fighters pose a threat to her way of life – but also stir up painful memories that threaten to expose her deepest secret.

As battle lines are drawn between the Greeks and the Amazons, both women soon learn the inevitable truth – in war, sacrifices must be made; especially if they are to protect the ones they love most . . .