Today I welcome B. K. Bilicki to the blog to answer a few questions for Interview³.

1) Tell us 3 little-known facts about you
- I never wanted to be a writer. Had no interest and always struggled with it in school.
- I started writing shortly after being hit by a runaway truck during a sleet storm. (That scene made it into my first book.)
- My very first print published story (Broken) sat on the editor’s desk for three years before being read. (She certainly did have nice things to say about it once she did read it, so the wait was definitely worth it.)

4) Share your 3 favourite books
- Swords and Deviltry by Fritz Leiber (my earliest primer on how to properly set up characters)
- The Swords of Lankhmar by Fritz Leiber (probably where I got my penchant for epics)
- Knights Errant - Merely Players #1 by Ian D. Smith (excellent handling of relationships and dialogue)

5) What are your 3 essential writing tools?
- Music (not while writing; mostly to inspire random thoughts to write about later)
- Computer
- Doing something completely unrelated to writing (most of my best stuff has been concocted while in the lab, either at work or in my basement)

6) Where are your 3 favourite places to write?
- Nearly all my writing is done at work on my lunch hour
- Someday I hope to set up a computer room at home and actually try to write for more than an hour/half-hour at a time
- Certainly wouldn’t object to writing in my private office in the house bought with the proceeds from the first Voices of the Sanctum film (or Kat Tales or the Breed stories or One of Those Nights – I’m not fussy)

7) Name 3 items on your writing wish list
- Beating all of my existing books into shape so they can be published someday
- Seeing one (or more) of my books adapted to a movie (or TV series, anime, graphic novel, etc)
- Finally writing a novel that I don’t read and want to revise the hell out of yet again

9) Tell us 3 of your writing plans for the year ahead
- Get One of Those Nights published
- Write down the fourth book in my Voices of the Sanctum series
- Do more/better promotional work for my released novels (website, interviews, promo items, etc).

10) Tell us about your latest release
Stage Three: Be is the third book of the opening trilogy of my Voices of the Sanctum series. Following an intense battle, first seer Kana Morel and her acolyte Jamyn Siska can finally start exploring their newborn relationship. When Kana suddenly vanishes, Jamyn will do anything to find her, even if it means breaking the promises he once made that continue to keep him alive. 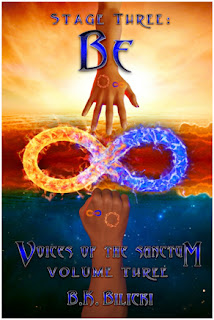 Following an intense battle to free her acolyte Jamyn from a malevolent entity, Kana finds herself in an unfamiliar situation with her student.
They can finally start moving forward.
True, there are a multitude of things to attend to first. Explanations must be given. Apologies must be made. Beyond that, however, they are free to start exploring their newborn relationship.
The past sometimes has other ideas.
When Kana suddenly vanishes, Jamyn is unable to help find her. His magic, still locked down after his recent escapades, will remain inactive per the wishes of the Inner Cabal to prevent him from interfering with the search.
With the life of his beloved mistress on the line, Jamyn will do anything to find her, even if it means breaking the promises he once made that continue to keep him alive.

About the Author
B.K. Bilicki is semi-living proof that the cosmos has a terribly strange sense of humour. Following the rapid-fire combo of birth and adoption, he spent twenty-six years absolutely despising all things writing. Sure, he read books and somehow scraped past the English courses inflicted upon him, but he couldn’t write his way out of a wet paper bag even with a running start. The odd pairing of a simply hideous story read on the erotica message board he frequented and a runaway truck slamming into his car during a sleet storm (no, not at the same time) jostled his brainbox enough to prod him into writing a simple short bit. Add several handfuls of rabid fans over the decades (many of them courtesy of the Erotica Readers and Writers Association), veiled and not-so-veiled threats against his person by said fans for his publishing inactivity, and a general lack of brains and poof. He somehow got a book accepted by Fireborn Publishing. Two more books later (and one pending), there seems to be no stopping the fool.
In his actual job, he’s an electronics technician based in the frozen tundra of the U.S. Midwest. He’s typically surrounded by a multitude of pets, three pretty cool offspring, and a seriously cute granddaughter who has been forbidden by her mum to read grand-dad’s book until she’s thirty.