Today I welcome Layla Dorine to the blog to share her latest release, Midnight Musicals and Coffee Ice Cream. 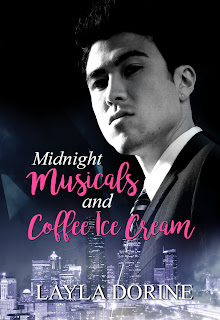 An escort and his client…could it ever be more than a business transaction.

Takashi never imagined that a simple call to an escort service would result in meeting Zander. What started out as a date to the winter gala at his office, morphed into a series of paid dates that offer him several unique opportunities to get to know the handsome, enigmatic escort.

Zander hates feeling like an ornament. After four years he’s ready for a new occupation. Unfortunately, he isn’t skilled enough for any job that would pay him the money he needs to make to support himself and his family. So, he stays with Mateo’s agency and keeps on taking clients, refusing to call them dates because that’s too personal.

Now their both trying to make the best of the brief moments they have together, blurring the lines more and more with every passing night. Takashi wants more, Zander wants to give it to him, but only after he gets the rest of his life worked out. Only problem is, he has no idea how.

Kumiko’s efforts to find him a date had fallen short, just as he’d expected them to. In the end, he’d called the number on the card Thomas had given him, and after answering several questions like if he wished to spend the whole night with the provider (absolutely not), and if he preferred male or female (male, absolutely male) he’d found himself matched up with Zander.
And there he was. Takashi could hardly believe his luck as he pulled up to the pillar to find Zander already pushing away from it and walking toward him, his gait lazy and confident. He looked young, tanned and gorgeous with hair so light a blond it was clear he spent plenty of time in the sun. The ends were practically sun bleached and curling a little, and now Takashi understood why Mateo had asked for a description of himself and what he’d be driving. He must have relayed it to Zander to make it easier to avoid any awkwardness. Fumbling, he threw the car into park and wiped his sweaty palms on his pants before getting out, knowing Kumiko would have a fit if she saw that. Heading around the car he hurried to open the door for Zander before the man could reach the handle and do it himself.
“You must be Takashi,” Zander said, smiling so bright it made the green of his eyes sparkle. The way his name rolled off Zander’s tongue with the ‘a’ just slightly drawn out was erotic as hell and Takashi nearly forgot to answer the question as he stood there, amazed at the young man’s beauty. This was nothing like he’d expected at all.
“Or not…” Zander muttered, smile fading as he started to turn away.
“No, I mean, yes, I am, Takashi that is, sorry,” Takashi replied, unable to conceal his nervousness. Dammit, he needed to get it together. It wasn’t like this was a real date. He’d paid for Zander’s time, and after tonight, he’d never lay eyes on the man again. Yet when Zander flashed another thousand megawatt smile in his direction, all Takashi could do was open and close his mouth, words dying on his lips. He opened the door before he could embarrass himself any further, shocked when Zander looked at him in surprise.
“Thank you,” he remarked, sliding in and putting on his seatbelt. Takashi went around to the driver’s side unable to believe his luck. Zander was stunning and polite, at the very least that would catch the eye of a few of his gossipier co-workers.
“What are your expectations for the evening?” Zander asked as they pulled away from the curb.
“I’m not certain I know what you mean,” Takashi replied.
“From me,” Zander explained. “Like do you want me to pose as your boyfriend or am I just a friend you’ve brought along to keep you company? Would you like me to hold your hand or put an arm around you or just stand close to you? Should I talk and be social or would you prefer I give a vacant smile and nod whenever anyone speaks to me? Will you want to kiss me, or have me kiss you? Shall I flirt with you throughout the night and be coy, or aloof, or just play it by ear and improvise. Are you bringing me to make someone else jealous or capture their attention? Will a time come when you’ll want me to make myself scarce, so you can talk to them? Just, things like that.”
“Wow,” breathed Takashi, shaking his head. “I never thought there was so much to it. I just wanted a date for the gala.”
Zander chuckled, smooth and rich. “Well, in that case, that’s pretty simple then. I can do that, no problem.”
“Thank you. As I’m sure you can tell, I’m pretty inexperienced with all this.”
“It’s okay,” Zander remarked, fixing him with a smile he only half caught out of the corner of his eye. “So how long have we been dating? Is this the first date or have we gone on several already? Are we keeping it casual or are we exclusive?”
Takashi laughed nervously. “How about we keep it as close to the truth as we can get. It’s our first date. I met you, ummm…at my sister’s studio. You were one of the models who came in to do test shots for a show. Unfortunately, you didn’t get a slot, but you did catch my eye, so here we are. If we were dating, it would be exclusive though, if that helps any.”
“It’s perfect, actually,” Zander said.

Layla Dorine lives among the sprawling prairies of Midwestern America, in a house with more cats than people. She loves hiking, fishing, swimming, martial arts, camping out, photography, cooking, and dabbling with several artistic mediums. In addition, she loves to travel and visit museums, historic, and haunted places.
Layla got hooked on writing as a child, starting with poetry and then branching out, and she hasn’t stopped writing since. Hard times, troubled times, the lives of her characters are never easy, but then what life is? The story is in the struggle, the journey, the triumphs and the falls. She writes about artists, musicians, loners, drifters, dreamers, hippies, bikers, truckers, hunters and all the other folks that she’s met and fallen in love with over the years. Sometimes she writes urban romance and sometimes its aliens crash landing near a roadside bar. When she isn’t writing, or wandering somewhere outdoors, she can often be found curled up with a good book and a kitty on her lap.