Do you remember the first book you read by yourself?
Honestly, no. It's too long ago. I remember some series I read as a child--Puddle Lane, the Mr. Men books, The Famous Five, The Secret Seven, The Babysister's Club.... Of those, Puddle Lane and Mr. Men are probably the ones I read earliest, but I couldn't give you a definite title or year.

Opening sentence:
Cary Westfield wasn't a terribly catchy name for a magician, so the playbill read The Incredible Mr. Mars.

From page 56:
Sharing a bed with a guy who had mugged him only a few hours ago would certainly be a fitting way to cap this bizarre day, wouldn't it? 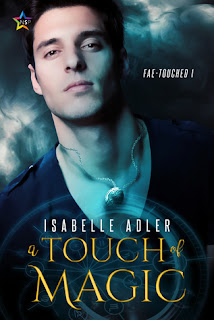 After returning to the straight and narrow, Cary Westfield hopes to rebuild his life as a stage magician. Only thing is, the success of his new show is entirely dependent on a strange medallion inherited from his late grandfather—an amulet that holds a rare and inexplicable power to captivate the wearer’s audience.

Ty prides himself on his ability to obtain any item of magical significance—for the right price. When a mysterious client hires him to steal a magical amulet from a neophyte illusionist, he’s sure it will be a quick and easy job, earning him a nice chunk of cash.

As it turns out, nothing is sure when greed and powerful magic are at play. When a mob boss with far-reaching aspirations beats Ty to the snatch, Cary and Ty form an unlikely partnership to get the amulet back. The unexpected spark of attraction between them is a welcome perk, but each man has his own plan for the prize.

All bets are off, however, when it is revealed the magical amulet holds a darker secret than either of them had bargained for.