Today I welcome Kevin Klehr to the blog to answer a few questions for Author Interview³.

1) Tell us 3 little-known facts about you
• My first book, Drama Queens with Love Scenes, took eight drafts and about ten years to write.
• My partner, Warren, and some of my friends note certain scenes from our lives in my books.
• My naughty novella, From Top to Bottom, was the hardest to write, yet still sells well.

4) Share your 3 favourite books
Jasper Jones by Craig Silvey.
Blue Heaven by Joe Keenan.
How to Talk to a Widower by Jonathan Tropper

5) What are your 3 essential writing tools?
The recordings I’ve dictated into my phone. Life experience. Silence.

6) Where are your 3 favourite places to write?
Our dining table (it seems to be a desk more than a place to eat).
I dream of having my own writing room one day, and I’d like to spend some time at Veruna Writers’ House in the Blue Mountains. It would be great to get feedback from other authors in the evening and generally talk writer stuff.

7) Name 3 items on your writing wish list
I would love to be signed to a large publisher one day, but that’s not easy when your work is GLBT based.
Having said that, I’m playing with the idea of writing an M/M love story that takes place over three decades.
I would also love to see one of my titles in a lot of bookstores, rather than just a few.

8) What are your top 3 tips for aspiring writers?
Do your laundry while you write. Some of the best ideas come when you’re at the clothes line.
Wait three months between drafts. Then, print out your manuscript in a font you’ve never seen it in with red pen in hand.

9) Tell us 3 of your writing plans for the year ahead
I’m working on two novels at the moment. One is The Midnight Man about a man who finds the man of his dreams, literally in his dreams. The other is the sequel to Social Media Central.

10) Tell us about your latest release
The latest release is Social Media Central, and is about Tayler, the only guy in a future city who doesn’t live his life online, while everyone else does. Then he meets femme fatale, Madeline Q, a famous fashion blogger who seduces him into her world of online fandom, media control and murder. 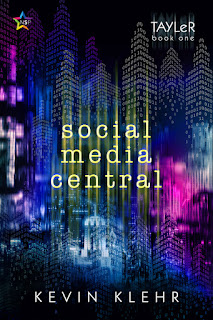 
In an age where everyone lives their lives through a screen, no one has more celebrity status than fashion blogger extraordinaire, Madeline Q. And in a chance meeting, loner geek, Tayler, is introduced to her world of parties, fan worship and seduction.

But as his own star rises, Madeline Q is arrested for murder. There’s just one problem – there is no corpse. Tayler soon learns that fiction blurs with reality on Social Media Central. 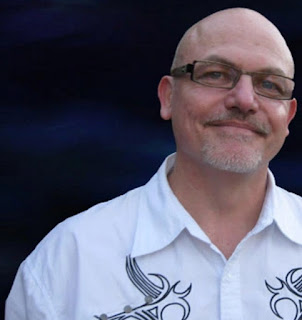 About the Author
Kevin is the author of a number of books including the Actors and Angels series and the Nate and Cameron Series.

The Actors and Angels series are three comedies about theatre in the Afterlife, where two friends explore their love for each other through several lifetimes with the help of a gay angel. The third in the series scored a Rainbow Award for Best Gay Alternative Universe/Reality novel.

The Nate and Cameron series are two novellas that delve into a relationship between a dreamer and a realist, where the latter is coming to terms with loving second best. The two stories, Nate and the New Yorker and Nate’s Last Tango, are also available in one paperback edition.

And his latest novel, Social Media Central, explores a future where everyone is addicted to their screens.

Kevin lives with his long-term partner, Warren, in their humble apartment (affectionately named Sabrina), in Australia’s own “Emerald City,” Sydney.