Today I welcome Bellora Quinn and Sadie Rose Bermingham to the blog to share their new MM release, Demon Familiar. 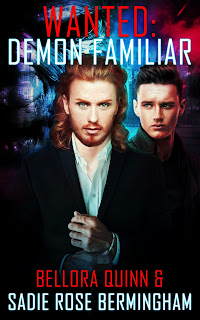 Sometimes when you don’t know what you want, life gives you what you need.
When Neil Markovic witnesses the murder of his mother by Bone Men his world is thrown into turmoil. On the run from the assassins that killed her, his sorcerer father and the police, Neil finds help in the form of a tall half fae alchemist named Malachai. Mal seems more accepting than most of Neil’s demon bloodline, but curiously immune to his charms.
Malachai Valentine, disgraced scion of a noble Leprechaun clan, back in the Old Country, is happy living as an anonymous scrap dealer. Using his talent for alchemy to make fuel and potions, most days he doesn’t even think of his ruinous past. When a scared young man with a fancy car crashes into his life, at first, Mal thinks he can do without the hassle. But as Neil begins to get under his skin, Mal starts to reassess his hopes and ambitions.
Harassed by megalomaniac fae and stalked by sorcerous killers at every turn, Malachai and Neil must fight to be free, and to find what they both truly wanted.

Sadie Rose Bermingham
A storyteller since before she started school, Sadie also enjoys reading, photography, live music and long walks on the beach. Sadie has worked as a bookseller, a pedigree editor for the racing industry and a local and family history researcher. Originally from the north of England, she has been working her way across the UK ever since. She currently resides on the south east coast with her long term partner, where she hopes to buy a mobile home and establish a whippet farm.