Number one bestselling author, Steven Manchester, is excited to announce the release of his long-anticipated novel, Three Shoeboxes. Originally produced as a stage play in 2015 by Footlights Repertory Company, the emotional story has already received critical acclaim. 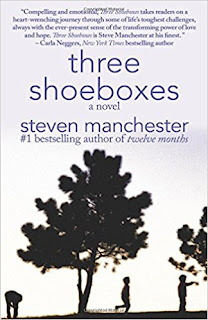 Mac Anderson holds life in the palm of his hand. He has a beautiful wife, three loving children, a comfortable home, and a successful career. Everything is perfect―or so it seems. Tragically, Mac is destined to learn that any sense of security can quickly prove false. Because an invisible enemy called Post Traumatic Stress Disorder has invaded Mac's fragile mind and it is about to drop him to his knees. He does all he can to conceal his inner chaos, but to no avail. Left to contend with ignorance, an insensitive justice system, and the struggles of an invisible disease, he loses everything―most importantly his family.

One shoebox might store an old pair of sneakers. Two shoeboxes might contain a lifetime of photographs. But in Three Shoeboxes, a father's undying love may be just enough to make things right again.

Three Shoeboxes is now available at iBooks, B&N, Amazon, and in bookstores nationwide.