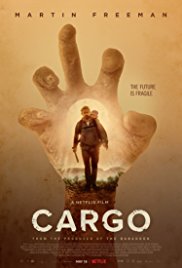 After an epidemic spread all over Australia, a father searches for someone willing to protect his daughter. (IMDB Synopsis)

I am not a zombie fan in general (Warm Bodies and Shaun of the Dead being notable exceptions); however, I was won over to give this one a try by the participation of Martin Freeman (whose work I have always enjoyed), the trailer (which suggested this would be different from the usual blood-fest), and the fact that it was filmed only a few hours north of where I live. And I'm glad I took a chance on it. Yes, I jumped a couple of times, but this was more emotional drama than shock-a-minute horror, as evidenced by my tears at the end. The plot was well conceived and offered a few surprise twists along the way. Stunning cinematography coupled with excellent performances from Martin Freeman and young Simone Landers. Maybe the editing could have been a little tighter here and there, but that is a very minor complaint about a generally well-crafted film. I could definitely watch it again, and it's a 4.5 star rating from me.