Opening sentence:
I've always hated waiting, ever since I was a small girl.

From page 56:
When not in pursuit of Mr Williams, DB fielded the occasional phone call from what Nell had originally assumed was a wife or girlfriend, but eventually realised was in fact his mother. 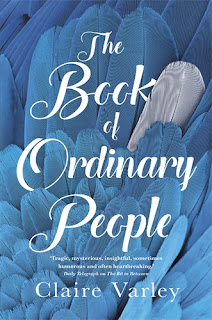 My Current Read
The Book of Ordinary People
Claire Varley

Meet Evangelia, a grieving souvlaki shop owner; Rik, a news hack haunted by his past; Nell, a lawyer who worries over her soul; and Ben, a young father desperate to measure up - four people who have everything and nothing to do with one another.

But each of their lives is about to be changed forever by Aida, a woman who never wanted their help, nor their sympathy. A woman with her own tale to tell...