Do you agree or disagree with this statement: A blogger's first name should be in a prominent place on his/her blog.
I think it's nice to have an idea of the person behind the book blog; however, I also respect that person's right to privacy, so if a blogger prefers to post their reviews under a pseudonym, I wouldn't hold it against them. My name is prominent on mine because I am also an author, so my name(s) is my brand and needs highlighting on all my social media. Different people have different priorities and different situations though.

Opening sentence:
It seemed such a good idea. A pleasant entertainment to amuse Queen Elizabeth I, a piece of community theatre for a Sunday afternoon in the summer of 1575.


From page 56:
After the chaos and suspicion surrounding the birth of James II's son nearly fifty years earlier, there had developed certain rituals which were meant to surround the birth of a royal baby. 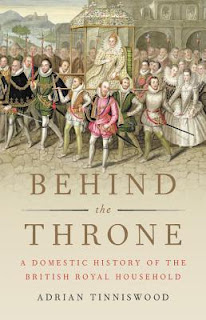 My Current Read
Behind the Throne
Adrian Tinniswood

An upstairs/downstairs history of the British royal court, from the Middle Ages to the reign of Queen Elizabeth II

Monarchs: they're just like us. They entertain their friends and eat and worry about money. Henry VIII tripped over his dogs. George II threw his son out of the house. James I had to cut back on the alcohol bills.

In Behind the Throne, historian Adrian Tinniswood uncovers the reality of five centuries of life at the English court, taking the reader on a remarkable journey from one Queen Elizabeth to another and exploring life as it was lived by clerks and courtiers and clowns and crowned heads: the power struggles and petty rivalries, the tension between duty and desire, the practicalities of cooking dinner for thousands and of ensuring the king always won when he played a game of tennis.

A masterful and witty social history of five centuries of royal life, Behind the Throne offers a grand tour of England's grandest households.