Today I welcome Sydney Blackburn to the blog to answer a few questions for Author Interview³.

1) Tell us 3 fun facts about your writing history
Fun fact One: My first writing serious writing project was meant to be Serious Science Fiction, but I ended up writing a (very bad) Harlequin-in-Space. No one has ever read it, though an abbreviated version had a brief life as a photocomic. One day I mean to rescue that plot and do right by it.
Fun fact Two: I like to invent background elements (historical figures, bands, etc) and use them in various, otherwise unrelated, stories. The play Bite Me! (a musical comedy about vampires), for example, referred to in What it Seems, was created for a “not your ordinary vampires” photocomic.
Fun fact Three: I wrote a tv mini-series about time travellers, just to see if I could. Then I got into the photo comics. The differences in writing, from screenplay to comics to prose narrative are greater than most people seem to think. Writing for a comic was a lesson in brevity, as dialogue had to be both in character voice, yet fit in a speech balloon.
None of those sound very fun. I am not a fun person.

4) Share your 3 favourite books
I never now how to answer that. A Brief History of Time by Stephen Hawking…, um… Claire Delacroix’s Merovingian historicals, but there’s like three of them so can that really count as one? Elric of Melnibone by Michael Moorcock, I love the philosophical concepts he uses in that series, which were used again by J. Michael Straczynski in the tv series Babylon 5… I can’t answer this question! IT’S TOO HARD!

5) What are your 3 essential writing tools?
My laptop, Google (I research on the fly: does this word mean what I think it does? How was fabric dying done in Morocco in the early middle ages? What were the most popular baby names in North America in the 80s? I’ve invented this cocktail—does it already exist?) I guess I only have two.

6) Where are your 3 favourite places to write?
My desk, but my desk is beside Rush Creek in the summer and in the city in the winter. I’ve tried writing at cafes and the like, but I always spend way too much time people watching to be productive. As long as I can control the environment, I’m good. I’m dreadfully boring that way—put me in a castle or on a tropical beach and I am too busy cataloguing everything with my camera, no time to write!

7) Name 3 items on your writing wish list
I’d like to publish with Harlequin/Carina, just to say I’ve done it. Ideally their print division, but I find it hard to write the kind of stuff they publish. I have a small selection of classic Harlequins from the fifties and sixties, which seem closer in tone and content to the 19th century dime romances than modern romance stories.
I’d like to take The Kronos Project and novelize it, though the original format featured an ensemble cast, which doesn’t work well in a novel format.
I’d like to hire an illustrator for some art for some of my characters, particular Sil, Grace, and Nick from the Quicksilver stories. When writing sci-fi, it’s not easy to find photo inspiration images for character clothing or room décor. According to the internet, the future is white. So white.

8) What are your top 3 tips for aspiring writers?
1. The most important is, learn how to write. Learn about story structure and point of view and tense. These are the tools of your trade. Just as it would be pointless to become a carpenter without knowing how to use a square, assorted saws, etc, trying to write without the proper tools and the knowledge to use them results in shitty writing. Which is not a bad thing in and of itself—my sci-fi epic (failure) was definitely important for learning—just for the love of all that’s written DON’T PUBLISH YOUR LEARNING STORIES.
2. If you’re going to write genre fiction READ IT. Genre fiction has rules, conventions. At the risk of repeating myself, this IS DIFFERENT from television and movies. Seriously, reading a science fiction story written by someone whose sole experience of science fiction is television is a painfully horrendous experience. The ongoing discussion about whether or not romance needs a HEA/HFN  (IT DOES) is like trying to say a mystery doesn’t need to be solved. IT DOES.
3. Finally, your first work or first several works, is going to suck. Don’t publish it. But don’t quit. Expecting to be brilliant on the first try is like expecting to build a Frank Lloyd Wright home with your first hammer. It ain’t gonna happen. Just keep writing. Keep studying and learning your craft. Become proficient with your tools. YOU CAN DO IT!

9) Tell us 3 of your writing plans for the year ahead
In Vino Veritas is my newest release, a cute, fluffy contemporary, and Diplomacy Squared is coming out in September—a cute, fluffy sci-fi story.
I’ve written “the end” on a fantasy story, but it’s a very rough first draft and needs a lot of work before even considering submission or publication.
I have a dozen other works-in-progress, that at the very least I’d like to make more progress on, if not finishing. 2018 had a rough start for me.

10) Tell us about your latest release
In Vino Veritas.  I know I said my stories are cute and fluffy, but I do try to frame the fluff around an issue or trope. In this case, it’s about stereotypes and judging people based on appearances. I have zero desire to lecture people via my fiction; my first goal is always to serve the written equivalent of a cream cheese filled flaky pastry, and if it makes people think, great. If not, then they’ve had a fluffy escapist read.
So Anthony Beretta, over-worked winery owner, meets Oscar Kennett in less than ideal circumstances, and snap judgements are made on both sides. But they’re working together on a book drive, so they’re forced to interact and both soon realize they may have been hasty.
Even for fluff, the course of true love can’t just run smooth, so they have a few bumps to work out—Anthony’s fifteen-hour work days, Oscar’s jealousy.  There’s a Big Misunderstanding that yes, could be cleared up with a conversation (and Oscar is well aware of that, and it makes him SO FRUSTRATED—hey if we’re gonna use a trope, might as well hang a lampshade on it, right? LOL)
And it’s a romance so you know how it ends. EVERYONE DIES. ::maniacal laugh::
KIDDING. 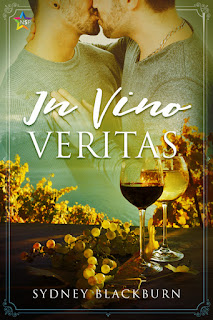 Anthony Beretta inherited the family winery at the tender age of twenty-four. It’s a struggle to keep it up, but he loves it and is determined to make it work even if it kills him. That is, if a motorcyclist doesn’t kill him first. He initially judges the man, attractive as he may be, on the basis of his appearance and apparently limited vocabulary. He soon discovers he’s wrong, but by then Oscar Kennett has already judged Anthony on his appearance.

Oscar thinks Tony Beretta is uptight and snobbish, and Tony’s speech for the charity they’re working on together reinforces that, even when he finds out Tony did it just to push his buttons. His adorable curls and sexy glasses might not be enough to change his mind, but maybe there’s more to Tony than meets the eye.

About the Author
Sydney Blackburn is a binary star system and a queer atheist writer of romance in contemporary, science fiction, and fantasy. She/he/they writes the stories they'd read if someone else had already written them.